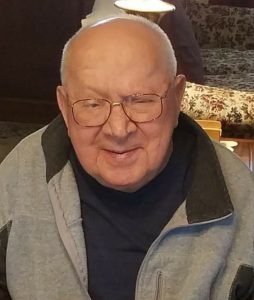 Clarence E. “Ed”  Reidenbach, 80, of Brewster, passed away on Saturday, December 19, 2020 at Aultman Hospital.
He was born near Brewster on January 19, 1940 to the late Clarence “Whips” and Helen (Speicher) Reidenbach and married Bonita Domer on June 10, 1961 and she survives.
Ed retired from Nortech Technoligies and previously worked for Superior Brand Meats.  He was an avid golfer and enjoyed repairing lawn mowers and working out at the YMCA.  He was a member of the Justus United Methodist Church.
In addition to his wife, Bonnie, he is survived by children, Karen (Derek) Schultz of Massillon and Jim Reidenbach of Mineral City; grandchildren, Jason Goulder and Stephanie Spencer; great grandchildren, Zach, Michael and Sara; brothers, Bob (Gloria) Reidenbach and Donny (Sue) Reidenbach; a sister-in-law, Patricia Reidenbach; and his beloved dog, Max.
In addition to his parents, he was preceded in death by 3 sisters; and a brother.

Family services will be held at the Spidell Funeral Home in Brewster.