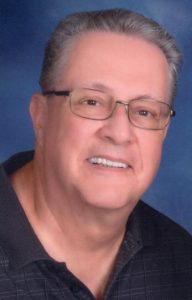 Orrville — Bobby D. Frushour, age 74, of Orrville, died Monday, December 28, 2020, at Smithville Western Care Center in Wooster, following a period of declining health.
Bobby was born on December 22, 1946, in Wooster, Ohio, to the late Robert and Martha (Drown) Frushour and graduated from Triway High School in 1964. He served as a Sergeant in the United States Air Force during the Vietnam War.  He married Goldie Good on June 22, 1990, in Orrville.
He worked as a master pipe & cabinet maker for Schantz Organ Company for 32 years, retiring in 2008.
Bobby was a member of East Chippewa Church of the Brethren where he served as an usher, and the American Legion Post 282 . He enjoyed spending time with his family, riding his scooter around, traveling, sports, and doing lawn work around the house.
Surviving in addition to his wife are step-son, Michael (special friend Amy) Kollert of Wadsworth; grandchildren, Kathleen (Terrance Ethridge) Schellin of Wooster; great-grandchild, Savannah Almond; two step-grandchildren, Vicki Crow, and Annee Tice; step-great-grandchildren, Richard, Jaxson, and Peyton, and brother, Bill Frushour of Wooster.
He was preceded in death by son, Robert E. Frushour; daughter, Teresa Schellin; step-daughter, Lori Kitts, and sisters, Ramona Reikowsky, and Cathy Yoakem.
Services will be held at a later date and time and cremation has taken place.
Memorials may be made to Ohio’s Hospice LifeCare 1900 Akron Road, Wooster, OH, 44691 www.lifecarehospice.org.
Auble Funeral Home in Orrville is handling the arrangements. Online registry and expressions of condolence may be made at www.aublefuneralhome.com.
Posted in Obituaries