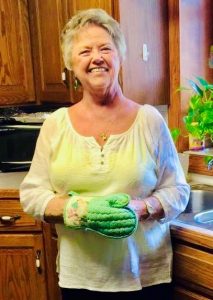 Medina – Janet Rae Selby, 77, passed away on December 31, 2020 in her Medina home surrounded by her family.
The second of six children, Janet, or Jan as she was known, was born on January 5, 1943, in Rock Rapids, Iowa, to the late Bernard and Iona (neé Schol) Broesder. After relocating to Bellflower, California as a child, Jan graduated from Bellflower High School in 1961 and married the love of her life, John “Ray” Selby, on October 20, 1961. Jan and John’s marriage was happy and fruitful, lasting 59 years, producing three children. Jan was always known in the neighborhood as a leader, a super fun girl, the one who arranged recipe swaps, and the provider of meals for new babies and the passing of friends.
Jan and John’s married life was one of adventure. They divided their final years between Ohio and the California desert, often making the journey in their camper with cats and dogs in tow, visiting friends and family along the way. As a family, they traveled and camped all over California, Oregon and the Midwest. The destination she loved most was Hawaii, traveling there numerous times. In addition to traveling domestically, Jan lived in Mexico as a foreign exchange student and throughout her life visited Ireland, Canada, and Taiwan.
Jan’s life was defined by her faith in God, a passion for helping others, and her love of family and animals. After ten years of helping others through her work as a Physical Therapy Assistant, she shifted focus to being a full-time stay-at-home mom. As her children grew older, she opened her home to foreign exchange students, whom she treated as her own children. Jan often expressed her love through her talents as a seamstress. She was involved with various projects including sewing for mission outreach programs that touched Mali (Africa), Giving Dolls in Wadsworth (Ohio), and numerous quilting and crafting endeavors. Her passion for helping others was such that during the early stages of the COVID-19 pandemic, and before her health declined, Jan spent her days making masks for close family and friends. She loved being a wife, mother, and grandmother more than anything else in her life and always found a way to sprinkle her passions of cooking, baking, sewing, and animals into everything she did.
Jan is survived by her husband, John Selby, and her three children, son Christopher Selby (Patricia) of Queen Creek, AZ, daughter Shannon Bauer (Zachary) of Medina, OH, and son Russell Selby (Mary) of Calimesa, CA.  Also surviving are her twelve grandchildren Andy (Trista), John, Amy, and Emily Selby; Trevor (Madeline), Anna (Ricardo), Marissa, and Erik (Monique) Gebhardt; Alethia Redick (Brady), and Abigayle, Adilynn, and Austin Selby (Alyssa). Jan was blessed with six great-grandchildren:  Kylie, Kamron, Memphis, Logan, Emmarie, and Nora, and numerous nieces and nephews. She is also survived by her beloved and devoted cat, Lewee, who was by her side as she passed.
She was preceded in death by brothers Paul and Bernie Broesder, brother-in-law Daniel Whitley, and grandchildren Sean and Kelli.
Jan, an avid prayer warrior, missionary supporter, and follower of God will be remembered at the Christian and Missionary Alliance Church, 300 S. Walnut St., Orrville. Friends may call on Tuesday, January 19 from 10am to 11:30am. Her memorial service will follow, with Pastor Paul Simonsen officiating. Her service will be live streamed at facebook.com/aublefuneralhome.
Visitors are asked to wear masks, practice social distancing, and adhere to posted signs. Visitors are also advised not to wear black, as she would have hated that, and to wear some green instead, as that was her favorite. Seating may be limited.
In lieu of flowers, any and all donations will be used towards the nursing education of Jan’s caretakers. Donations can be sent to 925 Beechwood Dr., Medina, OH, 44256.
The family would like to thank Ariel Snyder, Hailie Conrad, and Brock Snyder for generously and lovingly helping care for her in her final months. Their love and kindness will never be forgotten.
Auble Funeral Home in Orrville is handling the arrangements. Online registry and expressions of condolence may be made at www.aublefuneralhome.com.
Posted in Obituaries