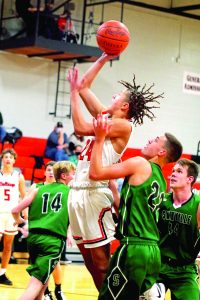 Jalen Wenger had another strong game Jan. 2 as he guided Dalton to a 71-52 road win over Waynedale. He nailed seven shots from beyond the 3-point arc and finished with 37 points and six rebounds. This extended his streak to five consecutive 25+ point games. Braylon Wenger also played a big role in the win with 12 points. Steiner finished with nine points and four assists. Malone helped out with six points and five dimes. Miller contributed five points and Riggenbach pulled five boards.

“The kids played well against Waynedale,” said Dalton’s head coach Kaleb Reed. “We have been very efficient offensively over the last three games. Defensively, we played very well in three of the four quarters. The biggest area where we need to improve is in our rebounding. We are still giving up too many offensive rebounds, but that is definitely correctable. Overall, I think we are heading in a good direction.”