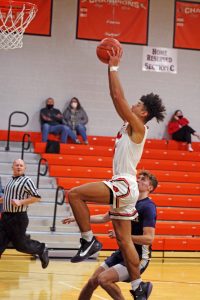 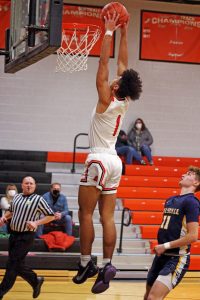 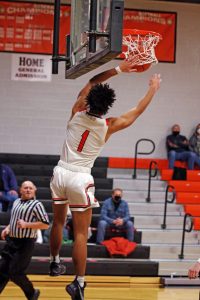 Dalton junior Jalen Wenger gets a slam dunk in Friday’s game against Hillsdale. Before the game, he was recognized for his 1,000th point of his high school career in Dalton’s Jan. 5 game against Revere.

DALTON  Jalen Wenger didn’t realize it at first when he scored his 1,000th point. The Dalton junior said he feels honored to be a part of a group of great scorers, but he remains focused on the bigger picture.

Dalton’s varsity boys basketball team hosted Hillsdale Friday and the Dawgs won 72-46. Before the start of the game, Wenger was honored for scoring the 1,000th point of his high school career in Dalton’s Jan. 5 game against Revere. In January 2019, former Lady Dawgs standout Makenna Geiser, as a junior, became the first Dalton girls varsity player to score 1,000 points.

“Jalen is a good basketball player who works very hard at his game in the off-season,” said Dalton’s head coach Kaleb Reed.  “I am very happy to see him be able to reach this milestone in his career here at Dalton. He has a bright future ahead of him.”

Wenger detailed how he was thinking of the bigger picture during that game when he made Dalton history.

“Honestly, I didn’t even know I had scored 1,000 points,” he said. “I don’t worry about that too much. Winning is on my mind too much to think about that. But with that to be able to join that club is an honor. I’m very grateful I can be included in that group alongside some great scorers.”