Dalton junior Austin Ryder earned his 100th win – with a pin- Wednesday. Jayden Miller, kindergartner, along with a supportive crowd hold up signs. (Photos by Mandy Geiser and Jayden Miller) 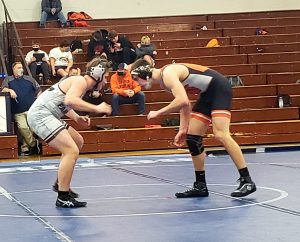 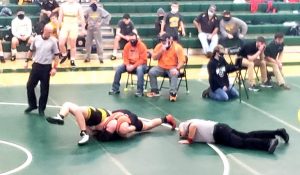 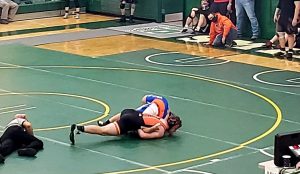 Dalton’s Sean Geiser Jan. 30 at the WCAL tournament at Smithville.

Dalton’s wrestling program recently experienced success at all levels. The junior high and high school teams faced Fairless and Loudonville in a tri-match Jan. 27 at Fairless. Both of the teams competed well and won the vast majority of contested matches, according to head coach Kenton Lemon.

Another accomplishment of that night was when Austin Ryder became the third Dalton varsity wrestler this year to reach 100 career wins. His win came on a pin against Loudonville, which improved him to a mark of 31-0 on the season to remain undefeated. Ryder is currently ranked No. 2 in the state at Div. III (220 lbs.).

Dalton finished second overall as a team Jan. 30 at the WCAL tournament at Smithville. Waynedale placed first and won its 10th straight championship.