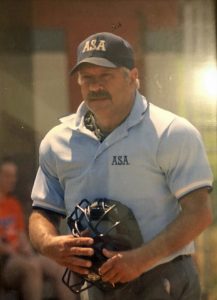 It is with great sadness that we announce the passing of our beloved husband, dad, popo and brother. Larry E. Lehman, 71, of Winesburg and formerly of Kidron, passed peacefully into eternal life Monday, February 8 at Shady Lawn Nursing Home in Dalton from cancer. He also struggled with Parkinson’s disease for 9 years.
He was born on November 3, 1949 in Wooster to Edwin and Ellen (Hofstetter) Lehman and grew up in Kidron. He graduated from Central Christian High School and was an auto mechanic with his dad at Lehman Auto Service in Kidron, eventually owning the business. After closing the shop in 1986 he worked a variety of jobs, retiring from Eastwood Furniture in 2014.
Larry played, coached and umpired softball. He was a fast-pitch softball umpire for over 30 years and was selected for 8 national tournaments. Through softball he made many friends and enjoyed reminiscing with them through the years.
On November 2, 2001 he married Mary Barkman and she survives.  He will be deeply missed by children, Josh (Beth) Lehman of Wooster and Cami Blosser of Canton; 6 grandchildren, Collin, Brooklin, Oliver, and Adeline Lehman, McCartney Long, and Logan Blosser; brothers, Stan (Jan) Lehman of Orrville, Ralph (Joanne) Lehman of Wooster and Steve (Carol) Lehman of Nampa, Idaho; sisters, Diane Sommer and Lorie (Marv) Troyer, both of Kidron; and former wife and good friend, Jann (Harry) Henthorn of Orrville.
He was preceded in death by his parents, and brother-in-law, Ron Sommer.
Due to Covid-19 restrictions a small family service will be held.  There will be no calling hours.  Spidell Funeral Home in Mount Eaton is handling the arrangements.
The family would like to thank Ohio’s Hospice LifeCare and Shady Lawn of Dalton for their compassionate care.

In lieu of flowers, memorial contributions may be made to the Kidron Community Park, Box 322, Kidron, OH 44636..