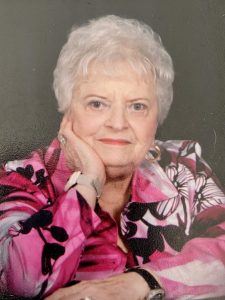 She graduated from Penn High School in Pittsburgh, PA and attended the New York City Floral Art Design School, followed by comptometer school.  Lucy worked at her father’s greenhouse with her floral design training and later transitioned into the business field following the sale of the greenhouse. She also worked as a Comptometer Operator for a number of years.

Lucy enjoyed cooking gourmet meals and hosted many family and friends to wonderful celebrations.  She treated her nieces and nephew like they were her own children and showered them with love and generosity.  She and her late husband, Al, enjoyed traveling and spent much time seeing the world.

In addition to her husband and parents, she was preceded in death by a brother, William Gross; and a niece, Sherrie Gross.

A private Mass of Christian burial will be held followed by inurnment at the Ohio Western Reserve National Cemetery in Seville.

Auble Funeral Home in Orrville is assisting the family with arrangements. Online registry and expressions of condolence may be made at www.aublefuneralhome.com.