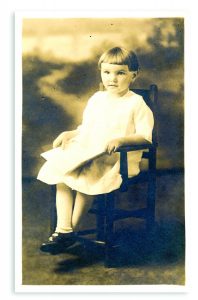 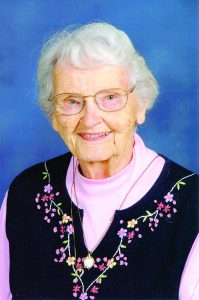 Sylvia Hostetler as a young girl and before she died at 99 in 2015. (PHOTOS PROVIDED) 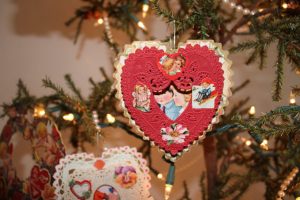 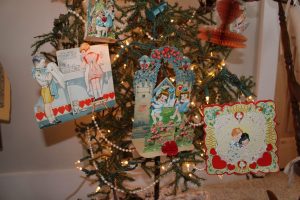 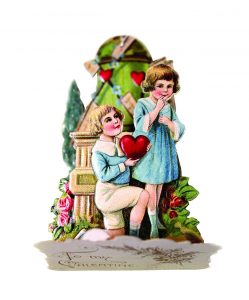 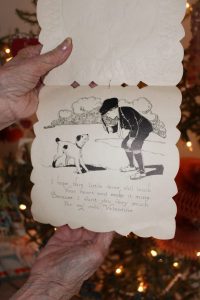 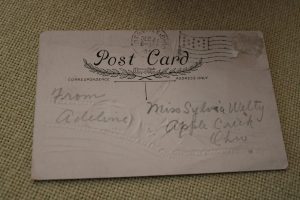 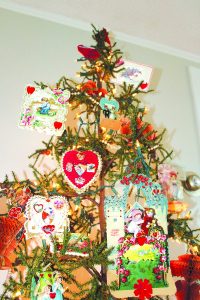 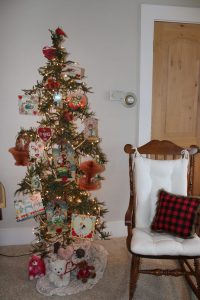 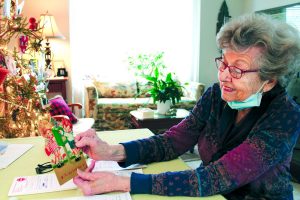 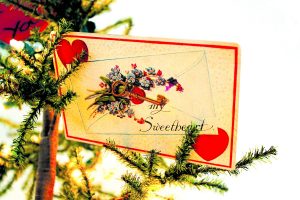 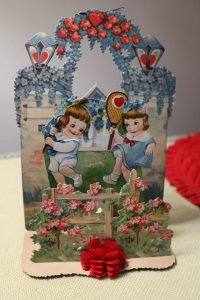 Dalton resident Katy Biggs discovered a box of vintage valentines that she had in her possession for a few decades. Upon closer examination and after some phone calls, Biggs was delighted not only to discover the cards had belonged to her longtime neighbor and friend, Sylvia Hostetler, but she discovered she has a connection with many of the senders. She put the cards on display on her tree in her house and enjoyed reconnecting with people from her past. (PHOTOS BY CHRISTINA McCUNE | DGKN)

DALTON  A rare find led to a local mystery and heartwarming discovery recently.

With the ongoing pandemic and these cold, dark mid-winter days, longtime village resident and retired Realtor Katy Biggs was inspired to keep the warmth and light from Christmas continuing on in her home. She decided to put away until next year the white doves and bells, and the crocheted snowflakes her mother had made. However, she kept up the lights and white faux pearl garland strings on her rustic-looking artificial balsam fir tree so she could decorate the tree for the next holiday.

In the back of her mind, Biggs knew she had a box of unique old valentines that may add color to the tree.

Biggs isn’t positive, but she thinks how a box of special items came to be in her possession – decades ago – may have been through a fun trek with one of her friends.

Biggs has fond memories of spending time years ago with Kate Slusser, who has since passed. One of the activities she enjoyed with Slusser – who was known as Dalton’s first female mayor – was hopping in Slusser’s Fiat and attending estate auctions. Biggs said Slusser tended to snatch up items that no one else seemed to want.

After more than 30 years, Biggs said she can’t remember exactly how she got the box. For years, it has been tucked away safely on a shelf in her closet. She knew that one day she would have time to figure out what to do with the carefully preserved contents.

Little did Biggs know that when she pulled the elaborate vintage cards and postcards from their years of hibernation and shone some light on them, she was opening a door to the past that took her on a journey. Along the way, she reconnected with past acquaintances, discovered some local history links, and enjoyed reminiscing.

“I never really looked at them closely,” Biggs said. “They were too neat to throw away but I didn’t know what I was going to do with them. I wasn’t going to get rid of them.”

Nowadays, school-age children have many options for Valentine’s Day. They can buy a box of cards with favorite characters or clever sayings to hand out in class. One sheet may have several cards that can be separated along the perforated lines. Some classes have students get creative with their boxes to collect the cards passed out by each classmate. Usually, a slim slot is sufficient for palm-sized cards to slide through.

Today’s cards have nothing on the antique Valentine’s Day cards that Biggs assembled and opened and did some slight repairs to so she could hang them on her tree. She noted that some of the cards in her collection date to the early quarter of the 20th century. They include 3D pop-up cards, full-sized greeting cards, and cards with paper lace and cutouts. A couple of them open up like an accordion in the shape of a basket or bell with honeycomb crepe paper. Some say “Made in Germany.”

“It’s just so fascinating to see these,” she said. “They are so unique.”

Rosy-cheeked cherubic faces are smiling on nearly every card. A little boy and girl on a motorcycle are on one card. One of Biggs’ favorite cards that she came across was signed by Oren Gerber. A windmill is in the background and the artwork includes a boy down on one knee who is presenting a heart to a girl who looks away shyly.

Biggs has decorated her entire tree with the cards – plus a handmade modern valentine from her great-grandson is near the top.

“You can’t go by that and not feel cheered,” Biggs said.

A few weeks ago, when she peered into the box, Biggs was delighted with the detail, artwork and design of the cards. Upon closer examination, Biggs gained a greater appreciation for the collection. She realized most of them belonged to a young girl named Sylvia Welty in the early 1900s. They appeared to be valentines addressed to her – and some to her sisters – from classmates when she was a child.

“I was so intrigued by them,” Biggs said. “I think these were all things that kids traded when they were in school.”

There were also some cards given to a young Sylvia by family members for various occasions including her birthday, Thanksgiving and Christmas.

Biggs, who moved to Dalton in the late 1950s with her husband, Ned, a former teacher, coach and mayor, recognized some last names of the young senders. A true sign of the times, one postcard was simply to “Miss Sylvia Welty” with the only address as “Apple Creek, Ohio.” The information apparently was sufficient because the card was postmarked and received.

Biggs had stumbled upon a puzzle. She figured the majority of valentines in the collection had been given out by classmates nearly a century ago, possibly at a grade school in the Kidron area.

But who was Sylvia Welty?

Biggs began some sleuthing. She knew Sylvia grew up in the area because of the Apple Creek address. She determined that Esther, Elta and Adeline were Sylvia’s sisters. Biggs made a list of senders’ names, including: Eunice Delphine Hofstetter, Barbara Zuercher, Oren Gerber, Anna Gerber, and Leonard Kempf.

Next, Biggs asked around. In these close-knit communities of eastern Wayne County it didn’t take her long to solve the mystery.

“This thing has gone a circle that is unbelievable,” Biggs said. “I started calling a couple of people.”

A friend, Beth Sprunger, told her that Sylvia Welty’s married name was Hostetler.

“Well, I knew Sylvia Hostetler because I lived two doors from her for a long time,” Biggs said.

With this revelation, everything began to fall into place in just a couple of days, and over the next couple of weeks, Biggs gathered even more information. She found she has a personal connection in some way to nearly every card.

“It’s just been quite a reminiscing, cheerful time,” she said.

Biggs recalled how Sylvia Hostetler and her husband, Homer, had a large house on W Main Street. Katy and Ned Biggs rented a first-floor apartment of a duplex just down the street. They watched each other’s children grow up. The Hostetlers had four sons: Gary, Phil, Rod and Rick. Sylvia grew everything the family needed in a big garden in a lot behind the house. Sylvia and Katy helped each other over the years and Sylvia helped Katy start a small garden.

“That was a pretty big shock in a community like this to have two people killed in one day,” Biggs said.

Both left behind spouses and children. Mabel and her husband, Duane, had five children who Biggs became acquainted with because they were either taught or coached by her husband and close friend, another longtime educator, Billie J. McFarren. Biggs kept in touch with one son in particular, Glen Frantz, and enjoyed catching up with him recently thanks to the discovery of the valentines.

With other names of Sylvia’s childhood friends, Biggs discovered more coincidences. The 1925 card signed by a young Oren Gerber turned out to be the father of a friend of hers, Eldon Gerber, who is co-owner of Gerber Lumber and Hardware in Kidron with Steve Gerber. Biggs had a nice conversation with Eldon as well. Other children of Oren, and his wife, Catherine, were Dolores, Jeanne and Carol. Oren passed away at age 95 in 2005, Biggs said.

A young Anna Gerber signed another valentine and Biggs learned that she was Oren’s sister. Anna married Marvin Miller who also worked at Gerber Lumber. They had four children: Les, Duane, Joyce and Glen.

Another of Sylvia’s classmates, Barbara Zuercher, Biggs knew by her married name, Barbara Wilson. She was the mother of Biggs’ daughter’s best friend in school, Joy. Sandy and Joy attended a Mennonite summer camp in Michigan together and worked in a Mexican-American church camp in California one summer.

According to an obituary online, Wilson died Feb. 7, 2011. She studied to become a teacher and worked in several different schools over the years including Sonnenberg School near Kidron and first grade at Dalton in the early part of her career.

“Again, here is somebody who comes back in my life very strongly because of my daughter,” Biggs said.

Biggs enjoyed tracing the timeline and learning about what became of the children who traded the cards nearly a century ago in a one-room school house in Kidron.

“They all mean so much to me,” she said.

She figured Sylvia was only a baby when one of her older sisters had written out the postcard for her in 1916, and the others were collected in grade school.

As an adult, Sylvia Hostetler worked at Dalton High School, Berg’s IGA and Steiner’s Swiss Chalet, Biggs said. In her later years, she moved in with one of her sons, Phil. She continued to stay active and maintained a garden.

“She was a strong person,” Biggs said. “She said what she thought. To raise four boys and worked and had this huge garden — she was very active for a long time and very social.”

Biggs said Hostetler was part of a coffee group and they would meet at Subway.

Biggs recently contacted Phil and his wife, Barb, who live in Dalton. A few years ago, Biggs had helped their son find a house in Massillon. Biggs said she enjoyed reconnecting and catching up with the Hostetlers over the valentines and memories of Sylvia. She said it was too bad that she hadn’t examined the cards sooner while her neighbor and friend was still alive.

“I could have shown her some of these things toward the end of her life, but of course didn’t know,” Biggs said.

Biggs recalled attending Sylvia Hostetler’s graveside funeral a few years ago. She remembered clearly that it was a bitterly cold day, but she couldn’t place the exact date and asked Phil Hostetler to jog her memory. 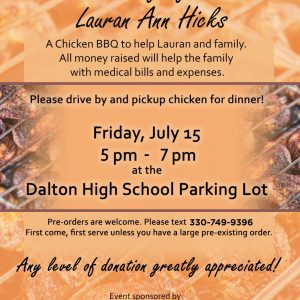 LETTER TO THE EDITOR: Dalton officials should resign because of actions, false statements