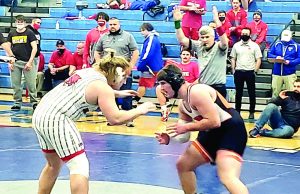 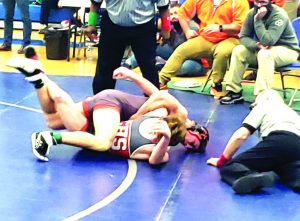 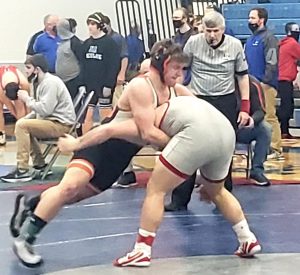 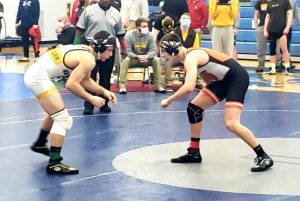 Dalton’s wrestlers finished third overall out of 13 Saturday at the sectional tournament at Northwestern.

The team sent 12 to the sectional tournament and set a new school record of six district qualifiers.

“I addressed our team on Friday and made them aware of what was at stake,” Coach Kenton Lemon wrote in an email. “I told them how I love this part of the season because we are reaching our peak as a team and this is the time when all of the hard work that they have put into this season finally pays off. That couldn’t have been more true this year.”

“We had some really nice draws going into the tournament which certainly helped us in the long run, but at the end of the day, our guys competed and earned everything that they got,” Lemon continued. “The difference between the state tournaments series (sectionals, districts and  state) is that your season is on the line. You get put into a situation such that if you win you move on, and if you lose your season could be over.

“I think our guys really showed a lot of mental toughness this weekend. Everyone wrestled with a purpose and a sense of urgency. Although we would have loved to get all 12 guys to the next level, six qualifiers, and two alternates is still a really good showing in arguably one of the toughest sectionals in Division 3 Wrestling. With that said, our work is not done. We have to have a great week of practice because this week we head to a predominately strong district with a lot of the top-ranked guys in Division 3. We are going to continue to carry out our plan. Stay sharp on our feet, get into our offense early and wear guys out. This coming weekend we are wrestling at Garfield Heights High School with the top four place winners at each weight class moving on to the state tournament. Our goal is to start Monday by getting ready for our first matches on Friday. From there, it’s one match at a time with the ultimate goal of getting into one of those top four spots and getting to the state tournament.

“I’m really proud of our entire team,” Lemon said in the email. “They have been through a lot this year in regards to wrestling a crazy schedule, COVID protocols, and just the regular stresses of wrestling season. Throughout the whole year, I haven’t heard any of our guys complain. We are extremely happy to be competing and the guys that get to compete this week have an opportunity to punch their ticket to the 2021 State Wrestling Tournament. I’m excited for a great week of practice and excited to get our guys back out on the mat on Friday for another great test and opportunity to represent their team, school, and community on high school wrestling’s biggest stage.”