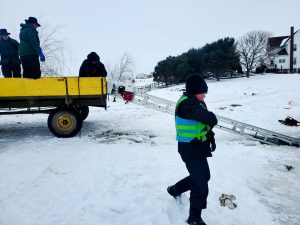 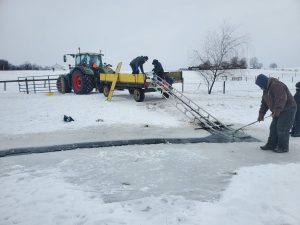 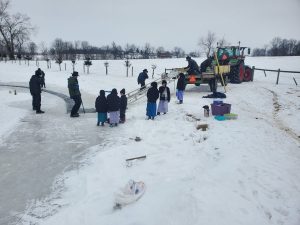 An annual activity that stocks a family’s insulated ice house for the year also becomes a fun event as friends gather to help out, and children have fun in the snow.

During the cold spell in mid-February, Clarence Steiner assisted some Amish friends and neighbors just south of Kidron with harvesting ice from the farm pond. He has helped out for the past four or five years.

First, ice was tested to make sure it was thick enough. Next, chunks were cut out with a chainsaw to make a canal. Blocks of ice weighed about 59 pounds and measured about 16 by 18 inches. The ice was seven inches thick, Steiner said.

“It was clear as ice cubes in your refrigerator,” he said. “It was super ice this year.”

The floating ice was pushed along to an elevator chain on a chute that pulled the slippery blocks into the wagon. Steiner estimated a few hundred blocks were hauled to the ice house.

“They have a lot of fun,” Steiner said. “They do it as a family or neighbors get together. It’s their time in the winter.”