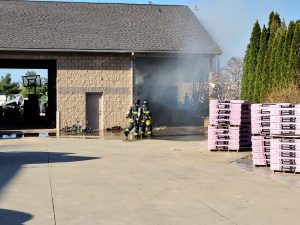 SUGAR CREEK TWP.  Local fire crews quickly kept a fire under control that was called in as a possible shed fire.

East Wayne Fire District was dispatched early Saturday evening to Withrich Road. Upon arrival, crews found a pile of hay and straw burning on the side of the structure, according to an EWFD Facebook post. Crews were able to protect the rest of the building from being involved in the fire, and the hay and straw piles were pulled apart and moved away from the structure.

The fire is still under further investigation, the post states.