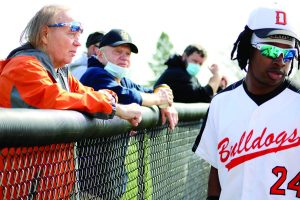 Dalton players took turns giving fist bumps to Wes McBride, left, and thanked him for donating money for new fencing. He and his twin brother, Les, graduated from Dalton in 1961.

Elements seemed to combine perfectly Saturday for a “bases loaded” feeling as Dalton baseball and softball players wound up and hosted Tuslaw for their home openers.

Dalton Local Superintendent Jim Saxer recognized senior catcher Bennet Gwin before the baseball game for the bleachers he completed for his Eagle Scout Project. Saxer then hustled to the softball field to throw out the first pitch.

Watching the baseball game, Wes McBride wasn’t expecting each Dalton baseball player to take a turn partway through the first game of the doubleheader to line up and give him a fist bump and thank him for donating funds for the new fencing. He and his twin brother, Les, who grew up in Kidron also were presented with baseball caps, and enjoyed reminiscing about when they played baseball and won the 1960 WCAL championship.