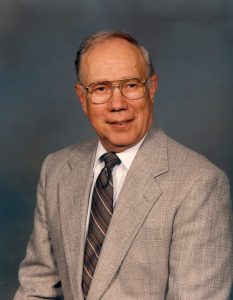 ORRVILLE — Clifford Edwin Anderson, passed away on Monday, April 5, 2021, at the age of 92.  He died peacefully while surrounded by his family.
Cliff was born on May 5, 1928, to Edgar and Florence Anderson.   He married Marie Smotherman on February 21, 1953, after having served in the United States Army during the Korean Conflict.
Cliff retired from National Life Insurance Company in 1984 and then continued working for his church in various capacities.
Cliff enjoyed spending his retirement years with his grandchildren and spending quiet times with his wife of 68 years.
Cliff is survived by his wife, Marie and their four children, Ed (Sheryl) Anderson, Bill (Debbie) Anderson, Mark Anderson, and Tina (Bill) Everett; 11 grandchildren; and two great-grandchildren.
In addition to his parents, he was preceded in death by his sisters, Evelyn, Cathy, and Donna; and brother, Carl.
A special thank you to Ohio’s Hospice LifeCare in Wooster and their caring staff.
A private graveside service will be held at East Chippewa Church of the Brethren.
In lieu of flowers a donation can be made to one’s favorite charity.
Online registry and expressions of condolence may be made at http://www.aublefuneralhome.com.
Posted in Obituaries