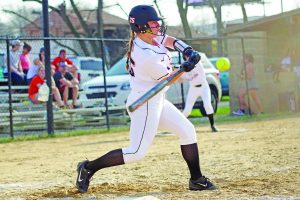 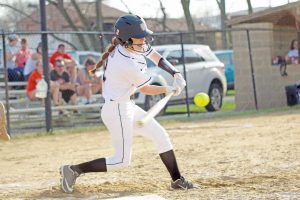 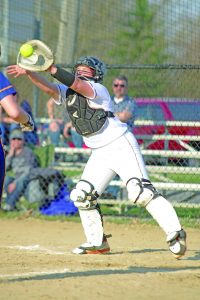 Dalton’s Lexi Vazquez tries for a play at the plate. 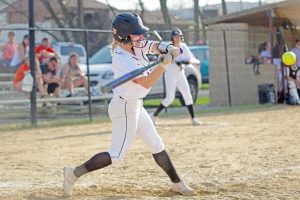 It was a difficult start to the week for Dalton High School’s varsity softball team when they had two losses to Hillsdale, but the Lady Dawgs were able to earn their first win of the season against Northwestern. They ended the week with a doubleheader loss to Manchester.

Dalton’s first game of the week was a home contest against Hillsdale on April 6. The Falcons took the 13-5 win. Hillsdale put six runs on the board in the second inning. They added five more runs in the fourth inning to make the score 11-0. Dalton was able to send home four runs in the bottom of the fifth. Tess Denning led off the inning with a solo homer. Angelique Kosier reached base on an error. With one out, Amber Jager doubled to send home Kosier. An RBI single by Elle Mooney plated Jager. Mooney made it home during the next at-bat when Joey Reynolds singled. The Lady Dawgs added one more run in the sixth when Kosier singled home Lexi Vazquez, who had doubled to lead off the inning. Hillsdale scored two more runs in the seventh inning.

Cadence Casto gave up 14 hits and 13 runs, eight of those runs were earned, in her start. She also struck out four batters.

The Lady Dawgs were shutout, 10-0, in their Apr. 7 road game at Hillsdale. Both teams were scoreless until Hillsdale broke through with one run in the bottom of the third inning. The Falcons later added eight runs in the fifth and one more in the sixth.

Mooney struck out three hitters and gave up 10 runs on nine hits while issuing nine walks.

Dalton’s first win of the season came April 8 at home against Northwestern. The Lady Dawgs won 8-5. Mooney drew a walk to lead off the bottom of the first. She came home on a double by Reynolds. In the second inning, Jager led off with a double and Emily Snyder sent her in with a single. Northwestern cut the lead in half by scoring one run in the top of the third, but the Lady Dawgs extended their lead with two runs in the fourth. The Huskies scored another run in the fifth, but Dalton once again responded with two more runs in the bottom of the inning when

Kosier sailed a two-run homer over the fence. The teams traded two runs in the sixth and Northwestern added one more run in the seventh, but it was not enough to stop Dalton from taking its first win of the season.

Casto was the winning pitcher. She gave up five runs on 10 hits, issued five walks and struck out three.

A late-game push by Dalton sent their first game of a doubleheader Apr. 10 against Manchester to extra innings, but the Panthers ultimately won 17-16 in eight innings. Manchester jumped out to an early 4-0 lead in the first inning, but Dalton halved it when Denning hit a two-run homer in the bottom of the inning. The Panthers added three runs in the second inning and the Lady Dawgs scored one run from a Kosier solo shot. Dalton took the lead in the third after scoring five runs. The highlight of the third inning was Denning leading off by sending a home run over the center field fence. Manchester scored five runs of its own in the fifth inning.

Vazquez smacked an RBI single in the bottom of the fifth to send home Reynolds, who reached base earlier on a single. Mooney doubled in a run in the sixth to make the score 12-10 with Manchester on top. The Panthers plated two more runs in the top of the seventh, but Dalton was not going away quietly. Denning rocketed a two-run bomb, her third home run of the game, in an inning that featured four runs by the Lady Dawgs that sent the game to extra innings. Manchester put up three runs in the eighth. Although Vazquez shot a two-run homer in the bottom of the eighth, it was not enough for the win.

Ava Fivecoat pitched the complete game and gave up 17 runs on 21 hits. She issued two walks and struck out four batters.

In the second game of the doubleheader, the Lady Dawgs fell to Manchester 19-15. The Panthers came out strong to score three runs in the first inning, six runs in the second, three more runs in the third and two runs in the fourth inning. Dalton exploded for 10 runs in the bottom of the fourth, which was punctuated by back-to-back RBI doubles from Denning and Vazquez.

Manchester plated two runs in the fifth and Dalton sent one runner home in the sixth. The score was 16-11 with the Panthers in the lead heading in to the seventh inning. Manchester extended its lead to 19-11 after scoring three runs in the inning. Vazquez blasted a three-run homer in the bottom of the seventh and Snyder had an RBI single to put four runs on the board for Dalton, but they fell short of the comeback.