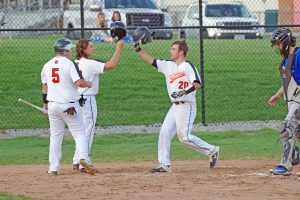 PHOTOS BY LISA McGINTY | LMc Photography
Brandon Basinger is greeted at home by Bennet Gwin and Colton Chupp after his home run. 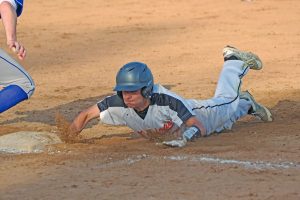 Kole Miller dives back to first to avoid the tag.
By ARIEL STAHLER

Dalton High School’s varsity baseball team took two games from Chippewa and won over Mogadore before ending the week by taking two games of a doubleheader from Orrville.

Andrew Wyckoff took a no-hitter into the sixth inning of the first game against the Red Riders. The Dawgs now have an overall record of 9-4.

Dalton took down host Chippewa 11-1 April 13. The Chipps started out with a lead when they scored one run in the bottom of the first inning. However, it was the only run Dalton allowed for the rest of the game. The Dawgs took the lead in the third inning when two runners scored on wild pitches. An RBI single from Seth Manley in the fourth inning made the score 3-1. A huge fifth inning, which saw the Dawgs plate eight runs, helped secure the victory.

Bennet Gwin led off the fifth with a double and came home during the next at-bat when Isaac Wengerd singled him home. Later in the inning, Owen Beatty drove in Wengerd with a single. Kole Miller, who reached base on an error, crossed home plate on a single by Jack Steiner. With two outs, Manley doubled in Steiner. Jaden Schlabach brought home Manley and Gwin doubled in Schlabach. Wengerd had his second RBI of the inning when he drove in Gwin with a single for the last run of the inning. Manley was the winning pitcher. He gave up one unearned run on three hits in five innings of work, issued one walk and struck out six Chippewa batters.

Dalton hosted Chippewa April 14 and completed the sweep with a 10-9 win. Manley led off the bottom of the first with a single and Colter Chupp scored him with a sacrifice fly for the first run of the game. Dalton extended the lead in the second inning after a two-run triple from Manley and a sacrifice fly from Schlabach. The Chipps tied the score with a four-run fourth inning. The game did not stay tied for long as the Dawgs responded with five runs in the bottom of the inning, which was punctuated by a three-run homer from Brandon Basinger. Both teams traded one run in the fifth inning. Chippewa attempted a comeback in the sixth, but they could only score four innings as Dalton hung on for the win.

“We have high hopes and expectations for this season with mostly upperclassmen, but we have to get some things figured out in a hurry defensively and pitching-wise,” said Dalton’s head coach Scott Huth. “We continually give up big innings by walking hitters we shouldn’t and making errors to open the door for other teams. But give Chippewa credit. They took advantage of our play and kept battling back when we had them down.”

Wengerd received the win with five runs, three which were earned, on six hits in six innings of work. He walked one hitter and struck out nine.

Dalton visited Mogadore April 16 and they left with a 4-2 win. After an uneventful top of the first inning by Dalton, Mogadore scored one run in the bottom of the inning. The Dawgs tied it up in the second inning when Chupp singled in Gwin. The Wildcats responded with a run in the bottom of the third. Gwin scored Dalton’s second run of the game in the sixth inning when he came home on a balk. Back-to-back RBI singles from Steiner and Adam Jarrett in the eighth gave the Dawgs the boost they needed for the win. Manley took the win. He gave up no runs on three hits, issued one walk and struck out two batters.

Dalton traveled to Orrville for a doubleheader Apr.il 17. In the first game, Wyckoff no-hit the Red Riders into the sixth inning and the Dawgs won 13-2. Dalton’s first two runs came in the second inning and they scored another run in the fourth to make it 3-0.

The Dawgs took advantage of some mistakes by Orrville to plate six runs in the sixth inning. In the seventh inning, Wengerd walked and then came around to score on a single by Schlabach. Gwin then reached base on a walk. Steiner grounded out to drive in Schlabach. With two outs, Basinger was hit by a pitch and took his place at first base. Wyckoff, who was already pitching a gem, also had success from the offensive side when he hit an RBI-double to plate Gwin. Tyler Nussbaum singled to score Basinger for Dalton’s final run of the inning. Wyckoff’s no-hitter was broken up in the seventh when Brady Marshall singled to lead off the inning for Orrville’s first hit of the day. The Red Riders went on to score two runs in the inning, but it was not enough to overcome the Dawgs.

Wyckoff worked a complete game and received the win. He gave up two earned runs on four hits while issuing four walks and striking out three batters.

Dalton took down Orrville 10-2 in their second game of the doubleheader. Gwin drove in a run with a single in the first inning to give Dalton the early lead. The Dawgs scored two more runs in the third inning and one more run in the fifth. The Red Riders scored their first run of the game in the bottom of the fifth inning. Dalton added four more runs in the sixth inning. Wengerd had a two-RBI single in the top of the seventh. Orrville scored one additional run in the bottom of the inning.

Starting pitcher Justin Basinger made his varsity debut and received the win. He pitched the complete game, gave up two runs on 10 hits, walked one and struck out four Red Riders.