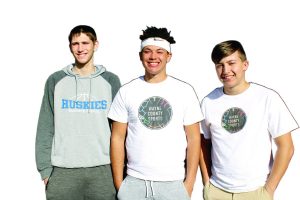 From left, Northwestern High School seniors Max Albright, Ben Nichols and Jimmy Cooke have been working diligently since the fall to put together the Wayne County Sports Documentary to be released early next month to the public on YouTube.

Max Albright is the “camera guy.”

Jimmy Cooke is the producer and editor.

Will Schaad makes T-shirts, helps carry equipment and has served as a “co-camera guy.”

And Ben Nichols – well, he’s the personality, the researcher, and the drive.

They’re only 18, but these Northwestern High School students became documentarians this past school year – and during the COVID-19 pandemic, no less. One interview led to another on a journey throughout Ohio. They took trips to other cities and states – and traveled into the past.

Now they’re completing the final edits on their hourlong documentary about the history of Wayne County sports. The seniors have worked on the project since late fall and they are looking forward to sharing their hard work with the world – or anyone with access to YouTube — beginning early next month.

Trailers and more information about the process are available through the Instagram page: “Wayne County Sports!!” (waynecountysports) which Nichols manages. A sort of side gig that has gone hand-in-hand with the documentary, the Instagram account has reached more than 5,200 followers in a short time, and Nichols and his crew are becoming well-known at local sporting events.

The experience hasn’t left them with inflated egos or lofty goals of making money off of their seemingly tireless hours, days, weeks and months of work. Instead, these young documentarians are grateful.

“It’s a community effort,” Nichols said. “Without the people in the communities we would not be able to get this done. … This all can’t be done without the community.”

Albright, Cooke and Nichols swung by Dalton from West Salem late last month to talk about “The Wayne County Sports Documentary,” and before leaving they did a quick live Instagram broadcast at Dalton’s baseball field.

The project highlights key moments in Wayne County sports history, as well as “a lot of connections from small Wayne County that people would never realize,” Cooke said.

The three all work outside of high school and funded the project themselves, and their families have been supportive. Selling “Wayne County Sports” T-shirts also has helped toward gas money and food on their trips.

Along with offering free access to the documentary on YouTube, the filmmakers have talked about a possible movie premiere at a Wooster-area facility. They would like to have Wayne County sports memorabilia on display for people at the debut.

“We wanted to make something cool for everyone,” Cooke said.

Albright said the project “kind of just took off from there.”

A plan to visit each school and feature several athletes on video evolved and expanded, Nichols said.

In an email to the Gazette & News, Martin said he is impressed by the passion displayed by his students, including another Northwestern senior, Robert Soueid, who is assisting with the project.

“This is exactly what learning and education is about: passion,” Martin wrote. “Jimmy took an interest right away last year making some highlight and hype videos for the basketball team, and all five gentlemen participate in athletics.”

He said he had daily discussions with the students about local, regional, and professional athletics, and they quickly took it upon themselves to organize and research the schools, athletes and teams for the documentary.

“They would come in daily with new ideas and bits of information,” Martin wrote. “Ben is very courageous and does most of the calling and contacting for former players and access to their stories and content. Jimmy and Max perform many of the technical aspects of recording and questioning. Robert helps with the organization and storyboarding of the content. They love what they are doing and it’s a lot of fun to watch them work on the content. The biggest thing I have to do is rein them in because their interest is almost limitless and the number of great programs and players in Wayne County’s history is large.”

Read the complete story in the April 21, 2021 print and e-edition of The Dalton Gazette & Kidron News.