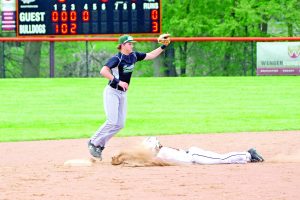 Excellent pitching, solid defense and long-ball shots were just what Dalton High School’s varsity baseball team needed to sweep Smithville. The wins put the Dawgs at a 14-5 overall record and a 9-1 WCAL record.

Dalton continued its road success when the Dawgs took a 12-5 win over host Smithville April 27. The Dawg put up six runs on the board in the top of the second, thanks in part to a 3-run blast by Seth Manley. Dalton added four more runs in the fourth inning when Isaac Wengerd singled home a run and then Jaden Schlabach hit a 3-run home run. The Smithies plated their first run of the game in the bottom of the inning. Both teams traded two runs in the fifth inning.
Smithville scored two runs in the bottom of the seventh, but Dalton held on firmly to the lead.
Manley received the win. He gave up three runs on three hits, issued six walks and struck out two in 4 1/3 innings of work.

“Both of our home runs tonight were 3-run shots that were hit a long way,” said Dalton’s head coach Scott Huth. “We played well offensively and defensively the first five innings.”
The Dawgs shut out Smithville 5-0 when the Smithies traveled to Dalton April 28.

Schlabach tripled in a run in the first inning to put the Dawgs on the board. In the third inning, Manley led off with a double and Schlabach reached base on an error. Bennet Gwin singled to send them both home and put Dalton ahead 3-0. The Dawgs scored two more runs in the fourth inning on a 2-RBI single by Wengerd.
Wengerd had success on the mound as well as at the dish. In his complete game gem, he gave up no runs on two hits, issued two walks and fanned three batters. 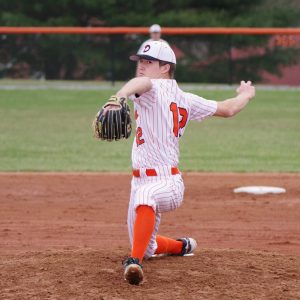 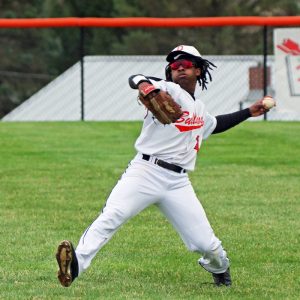