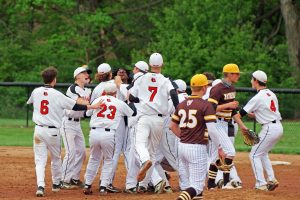 PHOTO BY LISA McGINTY
Dalton’s win against Waynedale put the Dawgs in a position to at least share the WCAL championship. 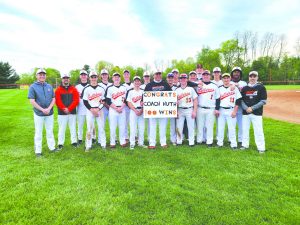 After being shut out by Waynedale early in the week, Dalton High School’s varsity baseball team bounced back the next game to walk-off against the Golden Bears. The game was also the 100th win for Dalton’s head coach Scott Huth. The Dawgs ended the week with a win over Fairless. Dalton is now 16-6 overall and 10-2 in the WCAL.

Host Waynedale took the May 5 game against Dalton 8-0. Seth Manley singled in the third inning for Dalton’s lone hit of the game. The Golden Bears scored six runs in the bottom of the third and they scored two more runs in the fourth inning.

Manley took the loss after giving up eight runs on nine hits in 3 2/3 innings. He issued two walks and struck out two batters.

“Very disappointed in how we played today,” said Huth. “They are a good team and we made too many mistakes to give ourselves a chance.”

Dalton came back May 6 to take down the visiting Golden Bears, 7-6, on a walk-off to earn the 100th win for Huth. The Dawgs scored both of their runs in the second inning on errors to get on the board. They scored another run courtesy of an error in the fourth inning. Waynedale put up one run in the fifth inning and five more in the sixth to take the lead. Dalton did not stay down long. Colter Chupp singled in two runs in the bottom of the sixth. That was followed by Tyler Nussbaum scoring on an error to even the game. In the bottom of the seventh with the score tied, Adam Jarrett doubled to lead off the inning. After two outs and the winning run on third, Jaden Schlabach came to the plate and sent Jarrett home to walk-off with the victory.

Isaac Wengerd was the winning pitcher. He pitched a complete game and gave up six earned runs on 11 hits while issuing five walks and recording three Ks.

“Waynedale is a very talented team, so nothing was certain until Jaden’s hit found a gap,” said Huth. “I am happy for the guys because that put them back into a position to at least share the WCAL championship they have worked so hard for. I am extremely proud of them for not giving up and continuing to battle every single at-bat and every single play.” 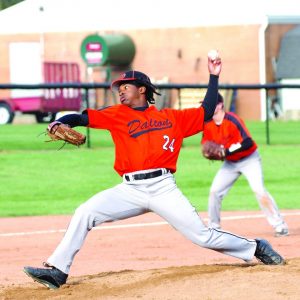