DEMS Greenhouse Plant Sale
When: 4-6 p.m. May 19
Location: Greenhouse and STEAM classroom
When: 2-4 p.m. May 20
Location: Cafeteria and Commons 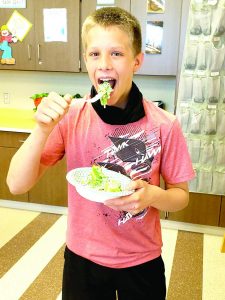 Sam Ediger is enjoying his salad made with our hydroponically grown lettuce. 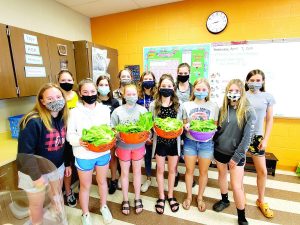 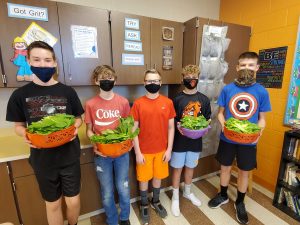 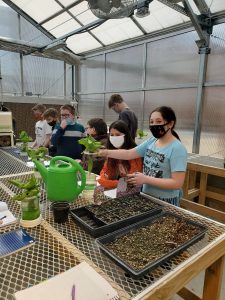 DALTON  Red and pink geraniums, coleus, dill, basil, fennel, watermelon, vinca, parsely, marigolds, swiss chard, arugula, burpless and straight cucumbers, ornamental sweet potatoes, peppers, spider plants, aloe vera, and more! What do all of these have in common? They can all be purchased at the Dalton Local Schools Greenhouse Plant Sale May 19 and 20.

Ranging from $1-$5, all profits go to the STEAM program and to support the greenhouse.

“The money goes back into buying soil, pots, fertilizer. I’ve never had to ask the district for more money once the greenhouse has been up and running. It really is self- sustaining,” said STEAM teacher Laura Grimm,

STEAM stands for Science, Technology, Engineering, Arts, and Math. According to Deron Cameron, former principal of the United States’ first STEAM certified school on steamedu.com, “STEAM represents a paradigm shift from traditional education philosophy, based on standardized test scores, to a modern ideal which focuses on valuing the learning process as much as the results.”

“I really like working in the greenhouse because you’re able to pick different jobs to do,” Hayden Cecil said. “My personal favorite is either soil/broom master or the waterer.”

The class propagates the geraniums by cutting them, dipping them in honey, then sticking them in soil. They also start seeds and then transplant them.

Sixth grader Carsten Nussbaum said, “The best job in the greenhouse is probably the soil job. Sure, it gets your hands dirty, but who cares? It’s really satisfying, too. But the best part about working in the greenhouse would be the teamwork involved. Just getting out there and working is just really calming. I LOVE IT!”

Ben Hostetler, another sixth grader said, “Doing hands on activities like this gives us a break from just memorizing things and lets us learn hands-on skills that we can apply in other places than just school.”

Seventh graders grew lettuce hydroponically using household items in the greenhouse. The idea stemmed from a book they read with ELA teacher, Jessica Matz, “A Long Walk to Water” by Linda Sue Park.

“Not everybody has a Mom,” Grimm said. “I lost both my parents, but someone still took care of me. Some of these kids are living with grandparents and aunts and uncles. I don’t want them to feel that they don’t have a caregiver.”

Grimm was instrumental in starting the STEAM program nearly 10 years ago.

“I’m a scientist,” she said. “And I didn’t want to just teach out of a book. Some of the kids that have difficulty with book learning excel in my class.”

Once in the new school building in 2014, Grimm had the idea of having a greenhouse for the school. “My background is agriculture,” she said. “I’m a plant pathologist. I worked in greenhouses. I was raised growing things. Both my grandparents were farmers. I want kids to have that same experience. If kids don’t know where their food comes from, how can they protect the land on which it’s grown?”

When a kindergarten STEAM student thought that lettuce grew on trees, she knew she was doing the right thing writing grants for the greenhouse.

Built during the summer and fall of 2017, the greenhouse was funded by generous donors in the community, and by grants Grimm received.

“This is a state-of-the-art greenhouse – heating and cooling is controlled automatically. We keep it at about 65-75 degrees all during the school year. Most of the months that kids are in school are the months that things don’t grow,” Grimm said. This high -ech system allows plants to grow in the winter.

The kindergarten students call it the “Magic Room” and are growing strawberries to give to their caregivers. They also grew potatoes and ate mashed potatoes in STEAM class. But, Grimm’s work teaching still isn’t done. “Even yesterday,” she said, “we were talking about what you can make from potatoes. They said potato chips, french fries, and one little kid said chicken nuggets! But, I’m not going to start raising chickens!”

Besides raising all the flowers for around the schools, every 7-8 weeks, the greenhouse is able to deliver a crop of romaine lettuce to the DEMS cafeteria.

Grimm said, “The lettuce is fantastic. They take it up to the cafeteria and they are so proud. They’ll come in the next day and say ‘Hey! I ate some of our lettuce!”

And Garret Wilson said, “I like working in the greenhouse because you get to see your plant grow all the way up until it’s sold.” 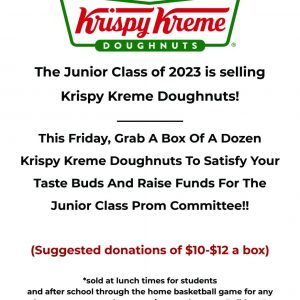 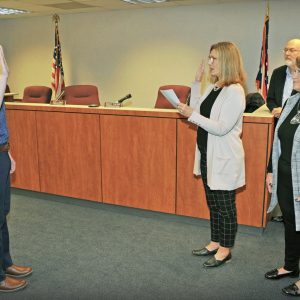 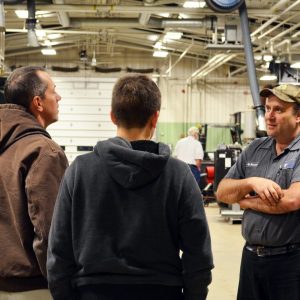