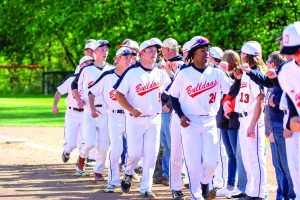 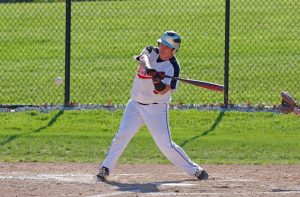 Dalton’s Colter Chupp keeps his eye on the ball.

After two wins over Rittman, Dalton High School’s varsity baseball team finished with a 12-2 record against WCAL teams, which was enough to grab a share of the WCAL championship with Waynedale. The Dawgs ended the week with a loss to Triway. They have an 18-7 overall record.

Dalton glided past host Rittman, 13-2, May 11. The Dawgs drew two runs in the first inning after back-to-back RBI-doubles from Jaden Schlabach and Bennet Gwin. The Indians came back to even the score in the bottom of the inning. Dalton capitalized on Rittman’s mistakes to push four runs over the plate in the third inning. The Dawgs added two runs in the fifth inning to increase their lead. Dalton’s five-run sixth inning was punctuated by a two-run double from Schlabach.

Dalton hosted Rittman May 12 for the final WCAL matchup of the regular season. The Dawgs took the 6-4 win to secure their part of the WCAL crown. The Indians jumped to a three-run lead in the top of the first, but Dalton nearly erased the lead with two runs in the bottom of the inning, thanks to RBI-singles from Colter Chupp and Andrew Wyckoff. Both teams traded one run in the third inning. Dalton came from behind to score three runs in the sixth inning to secure the victory.

Wyckoff recorded the win. He struck out four batters in two innings of work.

The loss went to Schlabach. He gave up four runs on two hits, issued eight walks and struck out four batters.

Dalton holds the No. 2 seed in the Division IV, Medina district tournament. They will face the winner of No. 7 Open Door Christian/No. 11 Lake Ridge Academy in the sectional final May 20.