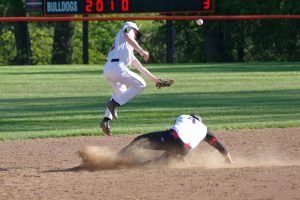 The 2021 season for Dalton High School’s varsity baseball team ended in the Division IV Medina District semifinal. The No. 2 seed Dawgs were upset by No. 3 Columbia 8-1 May 25 at Medina High School.

Both pitchers came out strong to start the game. Columbia was the first to score when it put up two runs in the top of the fourth inning. Dalton’s only run of the game came in the bottom of the fourth when Tyler Nussbaum scored on a groundout by Jack Steiner. The Raiders pulled ahead by scoring three runs in both the sixth and seventh innings.

Seth Manley took the loss. He pitched 5 2/3 innings, gave up five runs on five hits, issued two walks and struck out five hitters.
Dalton’s head coach Scott Huth detailed how his team was dealing with distractions during the game. Some of the players had been participating in graduation practice and senior awards earlier in the day. These events were held outside in the heat.

“I don’t think that helped us a whole lot, but like I have said before, I don’t like to make excuses,” Huth said about the weather and the end of the school year activities on game day. “Columbia pitched and fielded well and had a couple of timely hits that were just out of our
reach. It just wasn’t our day. It is disappointing that [the season] ended that way, on a day where we didn’t play our best, but we had a great season.”

Huth noted how his team was not the favorite to be at the top of the conference heading into the start of the season, but the Dawgs were able to prove themselves by winning a share of the WCAL championship, recording 20 wins in the season and collecting a sectional
championship. Huth said his players should be proud of what they accomplished this season.

With the 2020 season being lost to the COVID-19 pandemic, this season took on a different feel for the team.

“I think this season was pretty special for most of us because we didn’t get to play last year,” said Huth. “We felt like we could have competed well last year and we were all anxious to get out and prove to everyone that we had a good team. The guys put in a lot of work and it paid off. It was pretty special to win a league championship and, personally, to get my 100th win against a very good Waynedale team with a walk-off hit in the bottom of the seventh.”