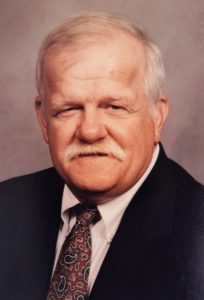 Dave Bolender, age 81 of McArthur passed away on Friday June 4th, 2021 at Riverside Methodist Hospital.  He was born to the late James and Virgie Grooms Bolender in New Boston, OH on Nov. 3rd, 1939, and grew up in Dalton, Ohio with his older brother Jim & his younger brother Bob.  Dave was a 1957 graduate of Dalton High School.  His natural athletic ability & fierce competitive spirit made him a star running back for the Dalton Bulldogs, earning him all-county & Akron Beacon Journal accolades.  Dave followed his brother Jim to Ohio University where he graduated in 1961.  He began a teaching & coaching career that would soon take him to his forever home, Mcarthur, Ohio.  There, he met his soon to be wife of 56 years, Janet Booth Bolender and became part of a family that would fill his life with love, laughter & ‘friendly’ competition.

For 33 years, Dave served as a teacher, administrator & coach in the Vinton County school system.  While he primarily taught Science, he took great pride in his time as Vinton County’s Head football Coach & was referred to as “Coach” & “Mr. Bolender” by former players & students throughout his life.  His coaching career & attachment to Vinton County athletics culminated into one of his proudest moments, election into the Vinton County Athletic Hall of Fame which he personally founded in 2003.  Post retirement, he was elected to public office, namely County Commissioner and McArthur Village Council.

Dave loved traveling; he used his Summers off from teaching to visit each of our 50 states, affording his family a lifetime of memories.  He was funny, smart, measured and wise.  He was a man’s man who grew throughout his life, and softened at the birth of his nieces & grand daughters.  He dearly treasured the titles of father, grandfather, great grandfather & godfather.

He was known to many as “Uncle Dave”.  He took great joy in watching his family compete in the classroom, on the field, on the court, and in their chosen careers.  He was so proud to count each & every one of them as one of his own.   His love for life, memorable laugh, razor sharp wit and giant personality will be missed by all who were lucky enough to have known him.

He was preceded in death by his parents, and brother Jim Bolender.

A funeral service will take place at 2PM  Wednesday June 9, at Garrett-Cardaras Funeral Home,  201 W High St, McArthur, OH 45651 officiated by Fr Dave Young. Burial will follow the service at Elk Cemetery. Family and friends may call from 5PM until 8PM Tuesday at the funeral home.  In lieu of flowers, donations can be made to the Vinton County High School Football program, 63910 US-50, McArthur, OH 45651.   Online condolences can be made at www.funeralhome.com  or www.cardaras.com