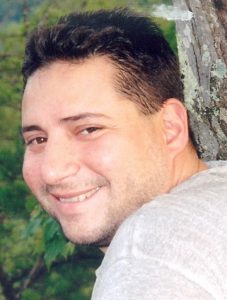 Canton — Marc Alan Flickinger, age 51, of Canton, formerly of Orrville, died Thursday, June 10, 2021, at his residence in Canton.
Marc was born on February 3, 1970, in Orrville, to Corina (Alejando) Howard and Andy Flickinger, attended Orrville High School, and served as an SPC in the United States Army during the Gulf War.
He worked as a Loan Officer for several banks and mortgage companies over the years including Country Wide Mortgage.
Marc loved his children, was an avid reader, loved to play video games, and especially loved spending time with his family.  He will also be remembered for his great sense of humor and his compassion for animals.
Surviving are his mother, Corina (Jim) Howard of Orrville; father Andy (Wendi) Flickinger of Wooster; son, Alan (Abbey) Flickinger of AL; two daughters, Morgan Flickinger of KY and Ellen VanArsdale of TX; grandchildren, Tyler, Riley, and Lois; four brothers, Drue Flickinger of Wooster, Christopher Flickinger of Orrville, Alex  Rogers of Orrville, and Tony (Amanda) Howard of Rittman; former sister-in law, Teresa Studer of Wooster; uncle, Rudy (Kateryna) Alejandro; and numerous aunts, uncles, cousins, nieces, and nephews.
A memorial service will be held at a later date.
Cremation will take place and private inurnment will be held at Ohio Western Reserve National Cemetery, where military rites will be observed.
Memorials may be made to Alcoholics Anonymous at www.aa.com or to The Salvation Army at www.salvationarmyusa.org.
Auble Funeral Home in Orrville is handling the arrangements. Online registry and expressions of condolence may be made at www.aublefuneralhome.com.
Posted in Obituaries