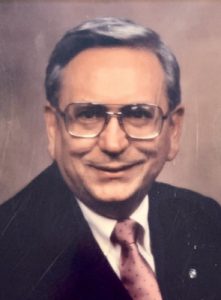 Dalton, OH — Paolo “Paul” Tomasino, age 86, of Dalton, formerly of Tampa, Florida died Wednesday, June 16, 2021, at Danbury Senior Living in Wooster, OH, under the care of Ohio’s LifeCare Hospice, following a period of declining health.
Paul was born on July 5, 1934, in Tampa, Florida, to the late Antonino and Vincenza (Spoto) Tomasino (both immigrants from Sicily), graduated from Jefferson High School in 1952, and married Sherrill M. Strasbaugh on June 23, 1979, in Tampa, Florida.  Sherrill survives.
Paul was in the U.S. Navy Seabees for two years, serving in the Atlantic as they prepared the tracking stations for the new missile systems.  He received his Bachelor of Civil Engineering in 1960 from the University of Florida.  He joined Watson & Company in Tampa, leaving as Senior Project Engineer in 1965 to join the City of Temple Terrace as Director of Public Works and City Engineer.  Paul remained there until 1970 when he joined American Engineering Company.  Later in 1971, he founded Tomasino & Associates, Inc. – Consulting Engineers.  For over 35 years Paul served as President and Chief Executive Officer of the firm, responsible for all company operations; he retired in 2007.  Paul was a member of American Society of Civil Engineers, Fellow serving as President of both the Florida Section and West Coast Branch.   He was the establishing member of the Student Section of ASCE at the University of South Florida.
Paul Tomasino served as a Director of the Pilot Bank for 21 years, advocating for small business and their financial resources.  Paul served by appointment of the Governor of Florida on the Florida Board of Professional Engineers from February 2002 until October 2009.  He was also active in the Temple Terrace Chamber of Commerce, twice served as President and received the President’s Award and Woodard Leadership Award.  Paul was a member of the Tampa North Rotary Club holding numerous club offices, was a three-time Paul Harris Fellow and had over 30 years of Perfect Attendance.  Mr. Tomasino earned the 2007 Tampa Bay Engineer of the Year Award, a fitting culmination to the end of his career.
Paul became a Christian and an active member of the First Baptist Church of Temple Terrace in 1980.  He served in many positions including Trustee and Committee Chair for the Construction of the Administration Building, as well as various projects for the Tampa Bay Baptist Association.
In addition to his wife, Sherrill, he is survived by sons John (Kathy) Tomasino, Larry (Laurel) Strasbaugh, grandsons Chris (Leah) and Craig (Jenny) Strasbaugh, and great granddaughters Adah, Elena, Marita, Devan and Aubrey Strasbaugh.  Paul was the “youngest” of his family generation and he and Sherrill arranged the only reunion for the entire family.
He was preceded in death by his parents, a sister Carmela (Nick) Busciglio, and a brother Dr. Charles Tomasino; sister-in-law Pat Tomasino survives.  Many nieces, nephews and cousins also survive.
Funeral and interment will be in Tampa, FL, in late July 2021.  Memorials may be made to: Ohio’s Hospice Life Care, 1900 Akron Road, Wooster, OH 44691 or The Rotary Foundation of Florida, PO Box 16068, Tampa, FL 33687.
Auble Funeral Home in Orrville is handling the arrangements. Online registry and expressions of condolence may be made at the funeral home’s website www.aublefuneralhome.com.
Posted in Obituaries