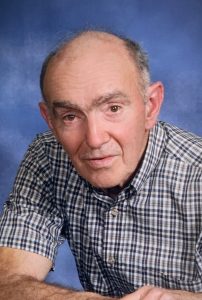 He was born in Massillon on January 24, 1942 to the late Walter A. and Irene M. (Balala) Helline Sr. and married Mary Ann Stotzer on April 17, 1971.
In addition to his wife, Mary Ann, he is survived by his children Wendy (Curt) Hostetler, Molly (Derek) Durant and Ryan (Stephanie) Helline; grandchildren, Logan, Ellie and Colton; siblings, Walt (Sue) Helline, Marlene Yoder, Ann (Harold) Prunty and Jeff (Susan) Helline; and a brother-in-law, Tom Braig.
In addition to his parents, he was preceded in death by a sister, Trudy Braig; and a brother-in-law, Robert Yoder.
Fred started out working for his parents in their apple orchard, then served as a Sugarcreek Township Trustee and worked as a custodian for Fairless Local Schools for many years before retiring in 1998.  Within that time he also had a vineyard at his home and was a member of the Wilmot Volunteer Fire Department, where he enjoyed working the ham dinners.  In his retirement, he worked for The Wilderness Center and developed his passion for fishing, participating in many walleye tournaments.  He also enjoyed playing cards with his siblings and his hobbies in his younger days included raising fox hounds, deer hunting, and water skiing.
He attended Necomer’s Chapel of Pigeon Run.
Memorial services will be held at 2PM on Thursday, July 1, 2021 at Newcomer’s Chapel of Pigeon Run, 11789 Sarbaugh Street, SW, Massillon, OH 44647, with Pastor Kim Vanoster officiating.  Per Fred’s wishes there will be no calling hours.  Spidell Funeral Home in Brewster is handling the arrangements.