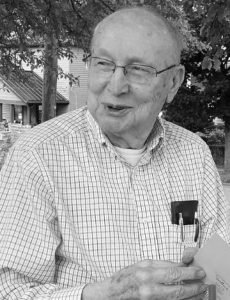 Orris Basinger, 91, of Berlin, died Wednesday, June 23, 2021.
“You got a penny?  Don’t spend it all in one place.”
Orris Lee Basinger was everything to us who called him Dad, Grandpa, Papa O, Pongkal, Hat Papa, Orris and O.  Slight in stature, but large in love, devotion, grace, and servitude.
“It’s all part of growing up.”
Orris was born in Wayne County, Ohio, May 5, 1930.  He grew up in a house where he nurtured his love of learning, athletics and God.  David and Ella (Zuercher) raised him and his siblings, Dale, Elva (Hartzler), Lloyd, Clair, and Lila (Collins), to be hard workers, to love life and to find laughter in everything every day.  He excelled in basketball and baseball.  After graduating high school, he and his family moved to Virginia.
“I’m going to marry her.”
In Virginia, before his first date with Lois Ours, he told a friend that she was going to be the one for him.  They were married September 25, 1954 and soon after moved to Lanham Maryland.  There they made their home and raised their children Brenda (Barry Hummel), Mike (Pam (Robin deceased)) and Jill.  He used the work ethic forged in Smithville to manage and grow People’s Supply Company in Prince George’s County.
“By the time you’re married, you won’t remember which knee it was.”
Each day was a gift to Orris.  He filled them with hard work and hard play.  He coached his kids basketball, baseball and softball teams.  He umpired all levels of baseball and took his family to Hyattsville Mennonite Church faithfully.  Orris was a gentle, nurturing and commanding presence.  Always hands on.  Always teaching.  Encouraging and pushing.  Actions that would continue on for the rest of his life.
Years passed and “siiiix” grandchildren became the apple of his eye.  Beau (Nicole) Hummel,  Burke Hummel and Brianne Liddick (Matthew), Brad and Luke (Nicole Litwiller) Mullet, and Jay (Gillian) Basinger.  These years saw him train grandsons in the art of umpiring and, forming memories that will be passed down to their grandkids.  Then came the great grandchildren, Bryson, Reagan, Kennedy, and Riley Hummel, Marreon Ross (Caledonia, OH), Caislyn, Jakobi, Breckin and Maylee Hummel (Berlin, OH), Brogan, Payton, and Corbin Liddick (West Chester, OH), and Matthew Basinger (Granite Quarry, NC).
Over his 91 years of life, 67 of which were spent with the love of his life, he impacted so many individuals’ lives.  If you’re reading this because you recognized his name, you’ve probably laughed alongside him.  He lived his love of God on his sleeve lifting up his family and peers in prayer.  Always the first to volunteer and never one to burden others, Orris loved people.
The ripple effects of his life will reach further than he would ever had imagined.  In fact, he probably wouldn’t be enjoying all this fuss.  We will make a bigger fuss with you all at a later date.
A life lived extraordinarily.
“I’m looking for a place that looks like this place.  Is this that place?”