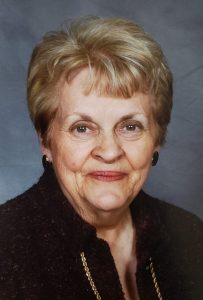 Phyllis Siders, of Dalton, passed away on Tuesday, June 22, 2021, at Ohio’s LifeCare Hospice in Wooster after a period of declining health. She was 91.

Born on March 9, 1930, Phyllis was the original “Garver Girl,” the eldest of three daughters of Don R. and Faye (Cooper) Garver. She grew up above her dad’s barber shop in Burbank where she could be seen helping her mother, caring for her sisters, and sweeping the street outside the house to keep things looking neat. As a young girl, she developed the nurturing spirit that would make her a beloved wife, mother, grandmother, sister, aunt, teacher, and friend to so many.

Phyllis met the love of her life, Stanford K. Siders, when she was in middle school. His family had moved to Burbank from Belden, Ohio, and the two became good friends despite his being three years older. They shared an interest in education and the arts, so they often walked the railroad tracks while discussing literature, music, and drama. He cheered when she and a friend won a state competition in one-act plays. Stan and Phyllis were still just friends when she graduated from Burbank High School in 1948, but they began dating after he returned home from serving in the Navy during WWII and began his studies at The College of Wooster. They were married on July 8, 1950.

While living in Congress, Stan and Phyllis were blessed with a daughter and three sons. She began her teaching career as a piano instructor in the Congress area, and many of her students went on to serve their churches as pianists, organists, and accompanists. Congress Community Church played an important role in the lives of the Siders family for many years.

In 1971 the family moved to Ashland. Stan became a professor and dean at Ashland College, where Phyllis earned a degree in education. She taught reading and fourth grade in the Northwestern School District before moving to Ashland City Schools, where she touched hundreds of lives by teaching Osborne Elementary first graders to read. She became an active member of First United Methodist Church in Ashland during this time.

Over the years, she and Stan delighted in watching their family flourish, and anyone who married into the Siders family became part of Phyllis’ flock. By birth and marriage, she became mother to eight, grandmother to 25, great-grandmother to 31, and recently, great-great grandmother to two. The house on Edgehill Avenue was a lively place full of visiting kids, grandkids, sisters and brothers-in-laws, neighbors, nieces, and nephews who gathered on the breezy front porch to drink tea and share stories. In later years, Phyllis and Stan built a home in Dalton in order to be closer to their children and their families, and they attended Dalton Methodist Church for several years.

Like her mother before her, Phyllis will be remembered as the generous heart of her family. A lover of mystery novels, poetry, antiques and English tea service, she was a consummate cook and hostess who entertained dozens of relatives not just on holidays but every Third Sunday, always decorating the tables and presenting each elaborately prepared dish with its own label. A lover of tradition, she continued buying Ugly Socks as Christmas gifts and served her legendary noodles at each family meal.

A private service with inurnment at Congress Cemetery will be held by the family.  Memorial contributions may be made to Congress Community Church, 10691 Franchester Road, West Salem, OH 44287, or to Ohio’s LifeCare Hospice, 1900 Akron Road, Wooster, OH 44691. Online condolences may be sent to the family at www.zakmonbarrenfh.com.