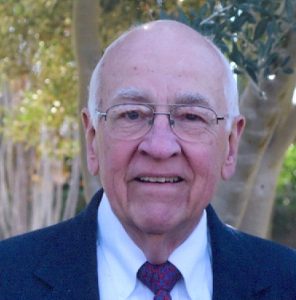 Orrville — Roy Barton “Bart” Drickhamer , age 84, of Orrville, passed away on Sunday, June 27, 2021, at Aultman Orrville Hospital in Orrville, following a period of declining health.
Bart was born on October 16, 1936 in Fremont, OH. He was preceded in death by his parents, Roy C. Drickhamer, Florence M. (Rofkar) Drickhamer, brother Ronald, plus an infant sister. He grew up on Catawba Island and graduated from Port Clinton High School. He graduated from The University of Akron while working as an engineer with The Goodyear Tire and Rubber Co. and retired in 1998 with 41 years of service.
He and Rosemary E. (Heyl) Drickhamer were married on August 18, 1956, at The Methodist Church in Norwalk, Ohio, in the aftermath of a tornado. They lived in Cuyahoga Fall, Akron, and then moved to Orrville in 1993. Bart was a member and past president of The Exchange Club of Orrville.
Bart and Rosemary have traveled extensively over the years visiting 32 countries including 12 cruises and 7 international tours.
Surviving are his wife Roasemary and daughters, Judie (Gene) Pouly of Orrville, Jennie (Brent) Oxspring of Gilbert, AZ. and sister Sandra Drickhamer of Avon. Also surviving are 8 grandchildren, Dr. Severin (Ana) Pouly of Little Rock, Arkansas, Honoree Pouly of Orrville, Geneva (Andrew) Johnson of Wooster, Etienne Pouly of Orrville, Dr. Collin (Katie) Oxspring of Wasilla, Alaska, Carissa (Nick) Routsong of Mesa, Arizona, Melina (Steven) Stapley of San Tan Valley, Arizona, Milan (Katherine) Oxspring of Salt Lake City, Utah, and 10 great grandchildren.
There will be no calling hours and a private family service will be held. Auble Funeral Home in Orrville is handling the arrangements and burial will be at the convenience of the family at Crown Hill Cemetery.
Online registry and expressions of condolence may be made at www.aublefuneralhome.com.
Posted in Obituaries