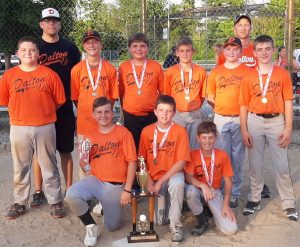 The youth baseball season came to an end last night as the final championship game was played between Dalton and Waynedale for the 12U Gold division.  The energy and excitement for the game was a fitting tribute to the season as crowds of people packed Village Green Park.  The showdown between an undefeated Dalton team, coached by Christ Hignight and Rex Steiner, against a very scrappy Waynedale club was bound to produce a noteworthy matchup.  Dalton opened the scoring in the second when Jason Soehnlen came around to score after getting on base with a sharply hit double to right centerfield.  The tide turned quickly when Waynedale batted in the top of the third inning.  Several consecutive hits opened the floodgates, leading to a 5-1 lead going in the bottom half of the third.  Dalton would not go away quietly.  A two-run homerun by Carter Hignight began a barrage of scoring from Dalton over the next three innings securing a 10-5 advantage going into the final at bats.  Waynedale proved once again why they deserved to be in this game, battling one hitter at a time until a single up the middle scored the go ahead run giving them an 11-10 lead before Dalton’s last chance to hit.  Despite getting the bat on the ball several times, Dalton was unable to push across the tying run and fell just short of securing the perfect season.  Congrats to all the boys who played in what was a terrific year of baseball.