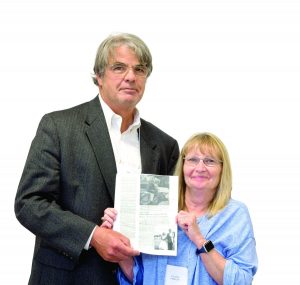 Jim Wertz and Elaine Griffin saw each other for the first time since high school graduation during their 51st class reunion. The Class of 1970 met at Dutch Kitchen after their reunion was cancelled last year during the global pandemic. 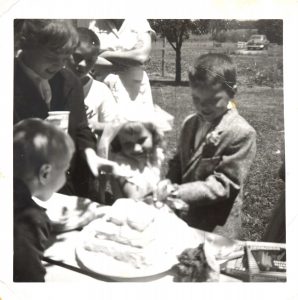 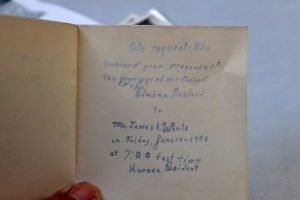 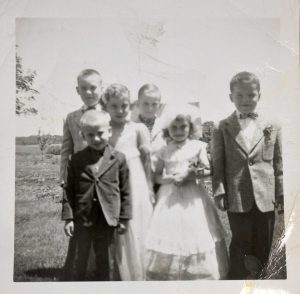 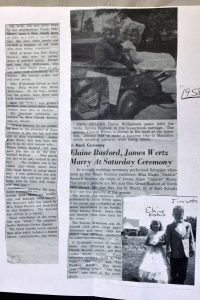 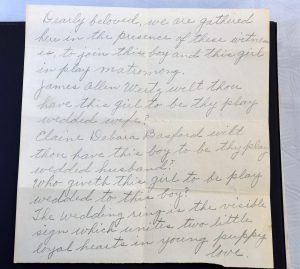 Elaine Griffin still has photos, the invitation, vows and a newspaper story from 1958 that covered a mock wedding she had in her neighborhood to Jim Wertz.

DALTON  In the summer of 1958, two girls thought it would be fun to host a mock wedding.

Jayne Wertz, older sister to Jimmie, apparently thought nothing of her 5-year-old brother’s feelings when she decided he would make a cute young groom one Saturday in June in a neighbor’s backyard.

She and a friend played matchmaker and picked a sweet 6-year-old neighbor, Elaine Basford – who went by “Debbie” when she was younger – for the perfect pint-sized bride.

As far as make-believe weddings go, this event was a lavish one and included music, decorations, cake and presents. The young wedding planners went all out and even wrote “play matrimony” vows and dropped off handwritten invitations so other neighborhood kids could dress up and join in on the unusual event.

This community newspaper also seemed to have fun reporting on the play ceremony in 1958. A story includes descriptions from the Kurzens’ living room decorated with “white crepe paper streamers and roses” and details the bride’s “floor length gown of white lace with a veil of white net. She wore white pearls and carried a bouquet of red roses with pink ribbon streamers.” “Dolly, the neighborhood’s Springer-Cocker Spaniel” was called the “guest entertainer” in the newspaper article, and gifts included play dishes, a bubble blower and coloring books. Kool-Aid was served in a bucket alongside the three-tier wedding cake.

The newlyweds lived happily ever after – just not together.