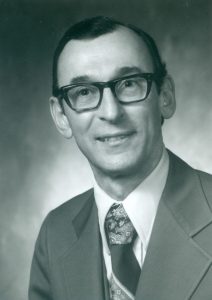 Orrville — James L. Gerber, age 92, of Orrville, formerly of Dalton, went to be with the Lord on Saturday morning, July 17, 2021, at his home in Orrville, following a period of declining health.
Jim was born on October 30, 1928, in Dover, Ohio, to the late Louis and Selma (Beer) Gerber, graduated from Dalton High School with the class of 1946, and served in the 64th Topographic Battalion – 8th Army in Japan during World War II. Following his service to our country, Jim returned to Ohio and obtained his Bachelor’s Degree from Wittenberg University in 1952. He married Germaine Nickles on August 25, 1957, in Navarre, Ohio, and they have been happily married for the last 63+ years.
He worked several jobs throughout his life. Following college, he worked for Timken Steel during 1952-53 in Philadelphia, PA, followed by Midway Lumber in Dover until 1958. Jim’s career path led to the sales department at Nickles Bakery, becoming the Vice President of Sales and Marketing, a position he held for many of his 35 years until his retirement on Nov. 1, 1993.
Jim was a member of Cornerstone Community Church in Dalton. He was an avid tree planter, enjoyed socializing, playing cards, and spending time with his wife and his family. He also spent his retirement serving on many boards, including the Alfred Nickles Bakery, Inc., Smith Dairy, First National Bank, Ashland’s Good Shepherd Home, the Wayne County Community Foundation, and the Orrville Salvation Army.
Surviving, in addition to his wife, are his four children, Louis (Alice) Gerber of Peoria, OR, Amy (Doug) Raley of Bend, OR, Holly Gerber of Dalton, and Eric (Carla) Gerber of Brownsville, OR; and grandchildren, Rachel, Rose, James, Doug, Phillip, Nickles, David, Daniel, Peter, Claire, and Alex.
He was preceded in death by his parents and his sister, Mary Lou (Richard) Rundell.
Burial will take place at 10:00am on Saturday morning, July 24, at the Dover Burial Park Cemetery, 5651 N. Wooster Ave, Dover, OH.
A memorial service will be held at 4:00pm on Sunday evening, July 25th, at Cornerstone Community Church, 18600 Davis Road, Dalton, with Pastor Doug Raley officiating.
In lieu of flowers, memorial contributions may be made to Samaritan’s Purse, P.O. Box 3000, Boone, NC 28607.
Auble Funeral Home in Orrville is handling the arrangements. Online registry and expressions of condolence may be made at www.aublefuneralhome.com.
Posted in Obituaries