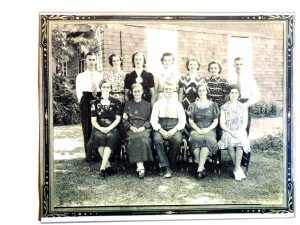 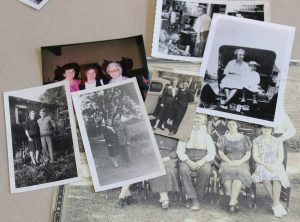 Erma V. Musser is second from the right on the bottom row seated next to her parents, Jacob and Mary Horst, and surrounded by her nine siblings. 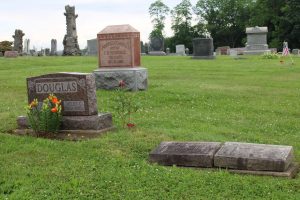 The gravestones of William Horst and Warren Gentry Musser are seen on the left as soon as one enters Dalton Cemetery.

DALTON  When you drive or walk in to the Dalton Cemetery and look on your left not too far from the main entrance, you will see two rectangular gravestones lying flat side by side on a small concrete slab. The headstones tell the story of two short lives. Two brothers each died at only a few months old in the same year they were born: William Horst in 1921, and Warren Gentry Musser in 1923.

Their mother, Erma V. Musser, was a humble woman. She was a simple woman. But she was strong and smart, and a woman of great faith.

Kathy Musser Henson and her siblings knew that Erma Musser, their beloved and well-respected grandmother, who was a young woman during the Great Depression, had been through much in her lifetime.

At times, through the decades, she was the rock that kept the family grounded.

Until this spring, Musser Henson, of Akron, and her family members didn’t realize before just how tough and brave their matriarch was. The family stumbled upon a mystery that dates back to 100 years thanks to a request by a nephew seeking military service records, and also asking about a name that runs in the family: William.

In 1995, when Erma Musser passed away at 92, Musser Henson inherited a box of photos and family papers. She kept them safe and secure with the intent to sort through them at a future date.

“I just knew the things that were in there and I wasn’t too concerned about them,” Musser Henson said. “I was just going to keep them and pass them along to family for family history.

“At the time I was satisfied knowing I had a really wonderful grandmother who really took good care of me and my brothers and helped out my mom after my father passed away,” she continued. “We were always so close.”

In May, her nephew’s interest in family history prompted her to sort through the paperwork that once belonged to her grandmother. She was surprised to come across a piece of paper that dates back 100 years.

“I pulled it out and I got some information that he needed and I was looking at her cemetery deed,” Musser Henson said, “and she’s buried in Clinton Cemetery next to her second husband, Wayne. Why does she have this deed in Dalton?”

In her hands, Musser Henson had a cemetery deed in Erma Horst’s name dated Dec. 30, 1921 for a lot measuring 10-by-15 feet, in the east cemetery in the village of Dalton, which she purchased for $12.50. She had questions. She began to investigate.

The family long had been aware that Erma had lost two infants. Death records show one became ill from pneumonia. She had raised two other children to adulthood: a son, Vernon, who was Kathy Musser Henson’s father, and a daughter: Patty.

Musser Henson learned that along the way, her grandmother as a young mom had lost three other babies: another son and a pair of twins. Erma Musser and other older relatives never spoke about these losses.

Musser Henson was floored when she made this discovery just a few weeks ago. She had no idea her grandmother had lost five babies as a young woman. These would have been her uncles and an aunt. She began to research online – typing names and years into search engines and made phone calls to try to piece together this newfound puzzle in her family history. She contacted Neena Miller, Dalton’s fiscal officer, and she planned to research at the county level for any death certificates or documents.