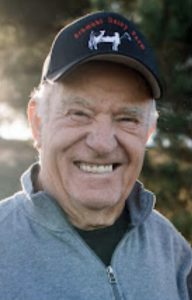 OTTO SCHMUKI of Navarre passed away Monday, September 13 at the age of 88. He is survived by his son Michael and daughter-in-law Patsy of Navarre, daughter Sandra and son-in-law Troy Pappas of Mt. Laurel, New Jersey; seven grandchildren: Kenny and wife Tailer, Laura Ford and husband Wyatt, Scott and Keith and his fiance Mallory, all of Navarre; Jason, April and Sean Pappas of Mt Laurel, New Jersey and two great grandsons Benjamin and Nicholas of Navarre. He is preceded in death by his wife Frieda to whom he was married for 60 years and his daughters Heidi and Stephanie.

Originally from Switzerland, Otto made America his home. The youngest of twelve children, he was born in Morschwill, Switzerland. He married Frieda in 1959, in Perth, Ontario, Canada and they came to the United States in 1962. In 1966, he established the Schmuki Dairy Farm which has been a successful family business for over 55 years. In 1991, he won the Ohio Conservation Award for his farm. He was a member of the Stark County Farm Bureau. The Bureau honored him in 2017 with the Distinguished Service Award. His passion was raising his beef herd and working on forestry projects. The family will be holding a private ceremony.