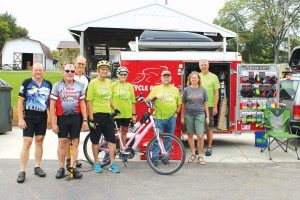 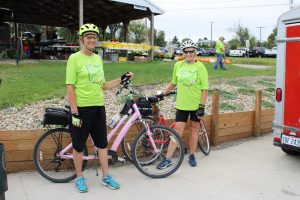 Flo Steiner, of Dalton, and Ann Bailey, of Wooster, center, joined about 50 others to bike the Ohio to Erie Trail last week. They stopped at the Dari-ette more than halfway through their trip.

DALTON  Some cloud cover on a warm late summer morning made for ideal conditions as about 50 cyclists made their way through Amish country and stopped at the Dalton Dari-ette last week. Trying to beat the threatening rain clouds, Flo Steiner, of Dalton, and Ann Bailey, of Wooster, friends and former co-workers, were among the first to pedal to the stop Sept. 15 more than halfway through the multi-day trek across Ohio.

The 326-mile trip from Cincinnati to Cleveland was a goal of Steiner’s since she moved to Ohio more than 25 years ago and found out about rails to trails. She stopped in to see her husband, Oren, who works at P. Graham Dunn’s before cruising in to the Dari-ette parking lot last Wednesday.

Her friend and fellow local resident, Mary Ann King, also was on her mind during the trip. After putting 1,000 miles on her pink bike last summer, King gave her bike to Steiner for the Ohio to Erie Trail trip.

Steiner and Bailey joined others from at least half a dozen other states, including California, Texas, New York, Kentucky, Indianapolis and Pennsylvania. The oldest cyclist on the trip was a 79-year-old resident from California who was biking with his daughter, said Lisa Daris, executive coordinator.

The ride had begun that Saturday morning and the group planned to spend the night in Massillon. The cyclists stay in hotels and stop at restaurants along the way, but camping also is an option. More than 1,000 people complete the scenic network of 24 trails each year.

Read the complete story in the Sept. 22 edition.