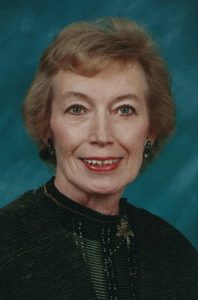 Her entire career was devoted to psychiatric-mental health nursing either as an educator, administrator, or a clinical nurse specialist.  She was employed by the former Apple Creek Developmental Center, Aultman Hospital School of Nursing, Aultman Hospital, and Kent State University Tuscarawas where she retired emeritus assistant professor in 2009.

While employed at the Apple Creek Developmental Center she met Vern A. King, a coworker,    and they married in 1961. He was the love of her life, and they were happily married until his passing in Dec. 2014.  They traveled extensively and she continued to travel after his passing.

She served on the  Mental Health and Recovery Board of Wayne and Holmes Counties for several terms holding several offices including chair.  The Board awarded her the Shining Light Award in 2009 for a citizen who has made a difference in the mental health field.

She was an active member of the professional nursing organization and a member of the Stark-Carroll District Nurses Association. She served on the Board of Directors of the Ohio Nurses Association and was a delegate to many state and national (American Nurses Association) conventions.  She attended the International Council of Nursing in Japan in 1977. She was part of a study group who toured China in 1978 and studied nursing education and health practices there.

Mary Ann lived a healthy lifestyle and ran for many years and was very proud to have run in the Columbus Marathon in 1989.  Later she bicycled and enjoyed riding the trails in Wayne and surrounding counties. She and her husband offered nursing scholarships to students at Aultman College and Kent State University Tuscarawas. In memory of her late husband, she offered yearly scholarships to someone pursuing a private pilot’s license.

She served on the board of the Aultman College of Nursing and Health Sciences. She was on the nursing advisory board of Herzing University.  She was an Ohio State Buckeye and Browns fan.  She enjoyed the weekly luncheons as a member of the Professional Football Hall of Fame Club. She enjoyed volunteering at the Orrville Area Boys and Girls Club, visiting people in area nursing homes, and was an active member of the Unity Church of Massillon.

Survivors include her brother, Timothy Schroeder (Deborah) from Berryville, VA.,  nieces, Kristin (JR) Fiala from Round Hill, VA,  Gretchen (Steven) Ripalda from Ashburn, VA and a nephew, Timothy (Kate) Schroeder from Leesburg, VA and 3 great nieces and 5 great nephews. She is survived by many kind and caring friends.  She felt blessed to have these friends help her on her final journey.

Funeral service will be held on Friday, October 1, 2021 at 11 a.m. at Zak-Thacker & Monbarren Funeral Home, 29 E. Main St., Dalton, OH 44618 with Dr. Bob Schurilla, officiating.  Calling hours will be Thursday from 5 to 8 p.m. Private burial will be at the Canal Fulton Cemetery. In lieu of flowers, donations may be made to a charity of choice or Aultman Hospice, 2821 Woodlawn NW, Canton, OH 44708.  Online obituary and guest registry are available at www.zakmonbarrenfh.com