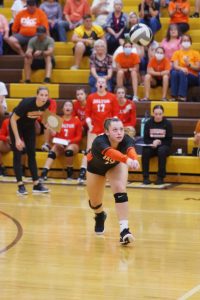 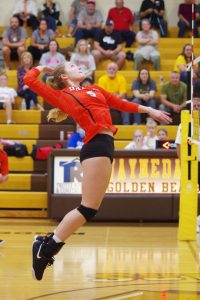 It was a rough week on the road for Dalton High School’s varsity volleyball team as they ran into trouble against Smithville and Waynedale. The Lady Dawgs now have an overall record of 10-8 and a WCAL record of 7-5.

The Lady Dawgs next traveled to Waynedale Oct. 7. The Golden Bears won 25-17, 25-19, 23-25, 25-18. Jager was Dalton’s top server with seven points and one ace. Courtney Nolt and Weaver both had five points and one ace each. Weaver also totaled 10 kills, 15 assists, 13 digs, three solo blocks and three assist blocks. Miller ended with nine kills and 12 digs. Cross had 13 assists.

“We knew coming into this week, it was going to be tough,” said Dalton’s Head Coach Allison Hostetler. “Not only were we playing Smithville and Waynedale, who we lost to the first time we played, we were playing both games away. We knew that both teams were going to use their middle hitters the most. We just had to defend and execute our game plan. I felt like we did this at times during both matches, we just weren’t able to do it through the whole match. We let both teams go on runs during sets and they would go up by five or six points. While this can be overcome in lesser opponents, it’s hard to come back against better teams.”

Hostetler said heading into this last week of the regular season, her team is looking for consistency and limiting runs as they prepare for the postseason.

“These are things we have been working on in practice and all the girls continue working hard in practice,” said Hostetler. “They come into practice each day with a positive attitude and not only want to better themselves, but their teammates, as well.”

“We have faced a lot of solid hitters,” said Central’s head coach Nate Holton. “(Smithville’s) Brooke Fatzinger may be the best we have seen yet. We fought a little more in the second and third sets, but the Smithies were too much for us.”

“Playing without a really important spark plug (Alli Mullet), senior captains Ruthie Nuzum and Emma Mast stepped up and played excellent games and helped make those around them better,” said Holton. “St. Peter’s is much improved this year and I thought our girls played disciplined and fundamentally attentive.”

“Once again, we found ourselves on the verge of pulling off a really cool upset, but we didn’t make enough plays down the stretch to eke out a win,” said Holton. “Lake Center has been playing really well all season and I thought our girls found some competitive juices and performed at their best. I’m really happy for the effort they brought tonight.”