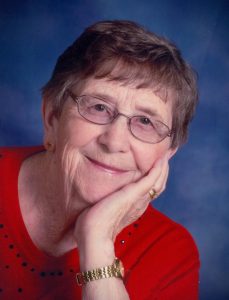 Orrville — Bonnie Jean Slicker, age 85, of Orrville, died Saturday, October 23, 2021, at Doylestown Health Care Center, following a period of declining health.
Bonnie was born on March 3, 1936, in Wayne County, to the late Wesley and Thelma (Swart) Davis, graduated from Shreve High School in 1953, and married Newton R. Greegor in 1959.  Newton died in 1985.  She later married Cletus R. Slicker in 1989, in Ft. Myers, FL. Clete died in 2015.
She was a line worker for The J.M. Smucker Company in Orrville for over 25 years, retiring in 1998.
Bonnie was a member of Christ United Church of Christ, Jelly City Senior Citizens, Orrville VFW Women’s Auxiliary and the Red Hat Society. She enjoyed playing cards and was an avid Red Rider and Ohio State Buckeyes fan.
Surviving are her son, Roger W. Greegor of Orrville; daughter, Susan Greegor of Orrville; four grandchildren; seven great-grandchildren; and a sister, Gail (Donnie) Riggenbach of Sterling.
In addition to her parents and husbands, she was preceded in death by a son, Larry A. Greegor; brother, Dean Davis; and sisters, Marilyn Hoffer and Treva Becker.
There will be no services and cremation will take place.
Memorials may be made to Alzheimer’s Association, 225 N. Michigan Avenue, Floor 17, Chicago, IL 60601, https://www.alz.org/.
Auble Funeral Home in Orrville is handling the arrangements. Online registry and expressions of condolence may be made at www.aublefuneralhome.com.
Posted in Obituaries