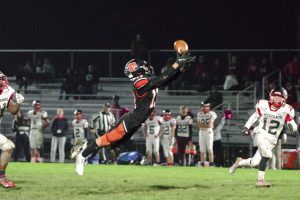 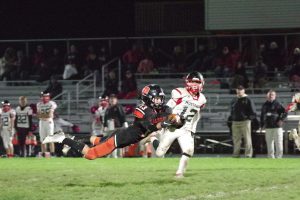 Dalton’s Cade Mullet hauls in a pass Saturday at the playoff opener at McFarren Field in Dalton against the Mathews Mustangs.

DALTON  Football’s second season started Saturday night in Dalton at McFarren Field. With the Bulldogs hosting the Mathews Mustangs, so began the postseason. Dalton made it clear that this one would be put to bed early as they won their opening round playoff game by a final score of 41-0.

Dalton’s first two possessions of the game lasted a total of just 21 seconds. The majority of that time was Jaiden Malone sprinting away from Mustang defenders on his way to an 80 yard TD and a 78 yard TD. Two plays. 21 seconds. 13-0 Dalton. Malone finished his evening with 190 yards on four catches.

Three of his receptions went for touchdowns. His final score of the contest, a 25 reception from Ethan Stutz, put Dalton up 27-0 just before halftime, by which time this game was seemingly decided.

Dalton would rack up 472 yards of total offense. Stutz was his efficient self, going 13 of 18 for 291 yards and three touchdowns. Meanwhile, the tandem of Jaden Schlabach and Tate Geiser repeatedly punished the Mustangs defense. For his effort, Schlabach was rewarded with 79 yards and two scores on 10 carries. Geiser reached the end zone once himself while toting the ball 12 times for 81 yards.

On the defensive side of the ball, the Bulldogs limited Mathews to 150 yards. Despite an admirable effort, the Mustangs could not make up any ground on Dalton’s defense.
When Geiser ran it in from six yards out to give Dalton a 34-0 lead midway through the third quarter, the clock would run continuously, per OHSAA rules. Schlabach put the finishing touches on this one early in the fourth quarter as he rammed it in from the two pushing the lead to 41-0 and sending Dalton to the second round of the playoffs.

The competition is sure to get stronger. The score a little closer. For now, Dalton is humming. As the playoffs roll on, the Dawgs are poised to do some damage.

Dalton is scheduled to play Independence at 7 p.m. Saturday at Orrville’s Red Rider Stadium, according to ohsaa.org.