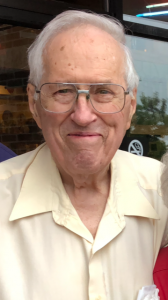 James Leslie Bixler, age 91, of Ann Arbor peacefully passed into his heavenly home on November 9, 2021 at his residence surrounded by his family.
Jim was born on April 8, 1930 in Orrville, Ohio to Allen & Ellen Bixler.
Jim is survived by his wife of 65 years June Bixler; daughters Caroline Bixler and Ingrid Stoltzfus (Barry); his twin brother John of Iowa City, IA; his grandchildren Drew, Leah and Bradley.
Jim was preceded in death by his son Grant Bixler; his father Allen Bixler and his mother Ellen Bixler and brother Robert Bixler.
Jim grew up in Kidron, Ohio and attended Kidron Elementary School and Dalton High School where he was on the football team, as well as singing in the choir and playing in the band and orchestra.
After High school Jim continued his education and graduated from Goshen College in 1952 with a degree in music.  He then went as a conscientious objector to Germany to serve on a construction crew in the PAX program from 1952-1954 to help rebuild the homes and farms of German Mennonite refugees that were destroyed in WWII.
Upon return from Germany he became reacquainted with June Gerber, whom he knew his whole life from their home community in Kidron, Ohio, and they married on September 9, 1956 and moved to Ann Arbor in 1960 for Jim to continue studying French horn at the University of Michigan.
He was offered a job by the University to record lessons by foreign language professors, and remained at the University, in the Modern Language Building, for 34 years with a recording studio, and assisting the University evolve with the ever-changing audio and video needs through the decades, a job he took great joy in. He was an excellent technician with a skilled ear and eye for all things audio/video, and enjoyed being a resource to many in this capacity.
Jim sang in many choirs over the years, as well as a quartet with his twin brother John, and two cousins Don and Mahlon, for over 50 years. He collected classical music records and spent many hours, with audio technical expertise, listening to and enjoying his favorite music.  He was an avid bird and butterfly lover, planting a garden that would attract all pollinators, delighting in their arrival. He was a passionate railfan and train enthusiast all his life, and was a member of the Ann Arbor Model Railroad Club for many years, a hobby he enjoyed very much with his son, Grant.  Photography was another passion, and spent long afternoons developing his own photographs in the basement for many years. After retirement, Jim found joy in cooking, finding recipes and preparing food for him and June. He and June enjoyed traveling to various European locations, including France, Switzerland, Greece and Germany, visiting some old PAX sites he helped to re-establish in the 1950’s. He loved sports and was a little league coach for several years in Ann Arbor. He was a dedicated Tigers, Lions and Wolverine fan, rarely missing a game.
Jim was also a member of First Presbyterian Church of Ann Arbor since 1983, singing in the choir and traveling to Haiti as part of mission trips there.
A burial of ashes for Jim will be held Tuesday, November 16, 2021 from 1:30 PM to 2:00 PM at First Presbyterian Church, 1432 Washtenaw Ave, Ann Arbor, Michigan 48104, followed by a memorial service from 2:00 PM to 3:00 PM.
In lieu of flowers, please send donations to First Presbyterian Church Local Missions.
Fond memories and expressions of sympathy may be shared at www.muehligannarbor.com for the Bixler family.
Posted in Obituaries