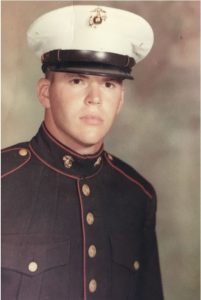 PHOENIX, AZ.  Roger Stanley Peters, age 72, passed away March 24, 2021 in Phoenix, Arizona. Born on November 23, 1948 in Massillon, Ohio to the late Frederick O. Peters and Clemintine (Calderhead) Peters. Roger was the youngest of six children. He graduated from Dalton High School in 1967. He was a veteran of the U.S. Marine Corp, serving in Vietnam. He was a member of the former Dalton VFW Post 5534 and the Orrville American Legion Post 282. Roger lived in Dalton and drove truck for Buckeye Feed for many years. Roger is survived by his daughter, Patricia Peters, two grandsons and one great grandchild. As well as his sister, Karen Mullett of Mogadore, OH. and brother, Terry Peters of Hart, MI.. He is preceded in death by his wife, LeAnne (Weinsheimer) Peters; his parents, Frederick and Clemintine Peters; sister Shirley Walton and brothers Tom Peters and Keith Peters. A private inurnment will be held at the Ohio Western Reserve National Cemetery in Rittman, Ohio at a future date.