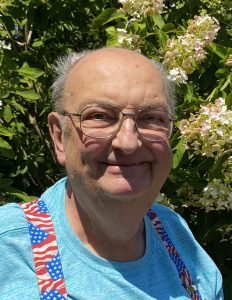 Marshallville, OH — Frank William Crawford, 76, of Marshallville, passed away Friday, December 17, 2021, at Wooster Community Hospital, following a short period of declining health.
Frank was born on January 11, 1945, in Warsaw, New York, to the late Ellsworth and Estelle (Rowe) Crawford.  Following graduation in 1964 from Perry High School, he went on to serve in the Air Force as an Electric Power Production Specialist for 10 years (1965-1975).  His tours of duty included Germany, California, and the Philippines. After his honorable discharge he stayed in the Philippines raising a family.   In 1987 he moved his family to Alaska and he worked as a Heavy Duty Equipment Mechanic for Local 302 Operating Engineers Union. He retired in 2010 and moved to Ohio in 2020.
He enjoyed traveling; cooking and baking, especially experimenting while doing so; tinkering with everything; spending time outdoors, going camping; and spending time with his wife, kids, grandkids and side-kick dog Bandit.
He is survived by his wife Sally (Liro) Crawford, daughters Angelene (Michael) Lockwood of WA, Andrea Tilton of FL, and Jennifer (Matthew) Yoder of OH; a son, Christopher (Kristy) Crawford of AK; nine grandchildren, Jeffrey Lockwood, Adam and Noah Tilton, Jonathan, Angela, and Timothy Crawford, Lily Yoder, Katie and Amelia Crawford; sister, Mary (Jerome) Lemley of NY.
He is preceded in death by his son, Frank A. Crawford; grandsons, Matthew Tilton and Michael Crawford; and brother, Albert Townes.
A Celebration of Life will be held at 6:00 pm on Tuesday, January 11, 2022, at Dayspring Christian Fellowship, 6592 Wales Ave. NW, Massillon, with Pastor Kent Miller officiating.
An outdoor service will be held for family and friends at Wyoming Cemetery in Warsaw, NY in June.
Auble Funeral Home in Orrville is handling local arrangements and Weeks Funeral Home in Warsaw, NY will handle the service in June.  Online registry and expressions of condolence may be made at www.aublefuneralhome.com.
Posted in Obituaries