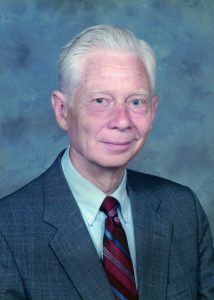 Jeremy Reid Felland
Jerry Felland, passed away peacefully at his Wilmot, Ohio home on Jan. 10, 2022 at the age of 89. He enjoyed learning and earned advanced degrees, a B.A. in Botany at Hanover College and M.S. in Conservation at the University of Michigan.  He passed on his knowledge by teaching young and old through nature education programs he developed as a Park Naturalist at both Clifty Falls State Park near Madison, IN and the Toledo Metropolitan Park System and finally as the first Director of The Wilderness Center in Stark County, Ohio. The state chapter of the Ohio Nature Conservancy also benefited from his service as treasurer. His children and grandchildren loved running his bluebird route with him. His legacy lives on through countless people to whom he imparted his love of nature.
Jerry served in South Korea as an Army medical laboratory technician for 2 years. He was clerk-treasurer of Wilmot for 31 years, and treasurer of the Wayne County Public Library District for 18 years. Wooster Noon Lions, Friends of Wooster Memorial Park, Rails-to-Trails of Wayne and Stark Counties and the Canton Hilltop Hikers were organizations that Jerry enjoyed with his friends. He was a faithful member of the Wilmot United Methodist Church and was very active in it for over 50 year. He enjoyed traveling with his family across the width of the USA and to many foreign countries. Jerry was a gentle man of great integrity and many varied interests.
He was preceded in death by Winifred Felland, his beloved wife of 44 years and his son, Carl. He enjoyed 16 years with his loving wife, Mary and is also survived by two brothers, James (Susan) Felland and David Felland. He was dearly loved and will be missed by his two daughters, Ruth (Shawn) Bohner and Anne (Denny) Hayford, a step-daughter, Tina Weaver, step-sons Dean (Wendy) Nelson and Don Nelson, daughter-in-law Robin Felland Parks and many grandchildren and great-grandchildren.

His Celebration of Life will be held at a later date. Donations in his memory can be directed to the Wilmot United Methodist Church or the Wilmot Fire Department.