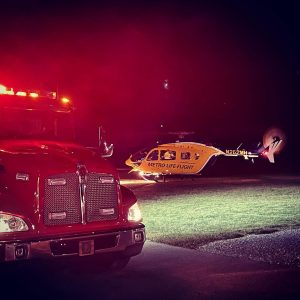 An Apple Creek man was taken by medical helicopter to the hospital Tuesday after the vehicle he was driving went off the road and rolled over.

KIDRON  A 43-year-old Apple Creek man was taken to an area hospital by a medical helicopter Tuesday evening after the vehicle he was driving went off the side of the road and flipped over.

A 2010 Chevy Aveo was heading westbound along Emerson Road at 6:35 p.m. Tuesday when the vehicle went off the right side of the road, struck a ditch, hit a stream and flipped over an embankment.

Roberts said the driver had serious injuries but they did not appear to be life-threatening. He was taken by ambulance to a landing zone and transported by Life Flight.

He was not wearing a seat belt, according to the report. He did not have any passengers.

Speed may have been a factor in the crash.