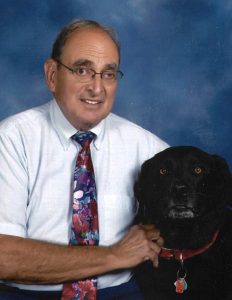 John George Leunk Jr., 82, of Wooster passed into the arms of his personal Savior, Jesus Christ, on January 17, 2022, by natural causes.
He was born on February 14, 1939 to the late John and Katherine Leunk in Altoona, Pennsylvania.
John graduated from the College of Wooster in 1960 and married Carol Kirkendall in September of that year. Gretchen and Karen were born and the family moved to the rural area near Apple Creek.   Later, a small farm was purchased in East Union Township, where animals and crops were grown organically.
John had a long career in education. Starting as a teacher for Mt. Eaton Elementary, which led to his first passion as principal for Apple Creek and Dalton middle schools.
These years led to his ultimate passion of realizing his gift and knowledge of carpentry and farming, which gave him his beloved reflections farm.
Once developing his farming skills, he became very active with the Piedmontese breed and was instrumental in getting the breed established in America.
He leaves behind daughters, Gretchen (Tim) McGuire of Cleveland and Karen Perry of Wooster; granddaughters, Maxine and Alexandra McGuire; a sister, Betty Martin of Wooster; numerous step-grandchildren and great grandchildren; nephew, Jeffrey Lewis and his wife Debra Lewis and Children Brandon, Mia, Jeff, and Gabi Lewis; niece, Terri Light and her husband Dale Light and children Courtney Rice (son Nickolas Light)  and Jed Light (his daughter Sienna Light) and Nickolas Light (deceased); niece, Michelle Harnish and children Kelli Tomco, Michael Lewis, Justeen Konche and April Konche
In addition to his parents, he was preceded in death by his wife, Carol on August 10, 2010.