At least 25 people applied for the position after coach and teacher Kaleb Reed stepped down from coaching to spend more time with his family. Reed will continue to teach at the high school.

“This was a very difficult decision for the District to make, as we had many very good and qualified candidates apply for the position,” Superintendent Jim Saxer wrote in an email. “In the end, Justin Greenfelder, who is a graduate of Jackson Local Schools and an attorney from Canton, rose to the top as our best candidate for many reasons.

“First, he is an incredible person, who has a heart for kids,” Saxer continued. “In talking with references, they stated: ‘He develops and nurtures relationships that are more than just coach and player during a season, but are lifetime commitments.’ Add to that the fact that Justin Greenfelder has a great mind for basketball.”

Greenfelder has 15 years of coaching experience, Saxer said. Most recently, he served as the associate varsity coach from 2017-2022 under Coach Matt Creamer at Canton Central Catholic High School. Before that, he was the lead varsity coach from 2014-2017 under Lee Foster. From 2010-2012, Greenfelder was the lead varsity assistant coach at Chippewa Local under Scott Giammarco.

Greenfelder began his coaching career under the leadership and mentorship of Coach Mike Fuline at Jackson Local from 2005-2010. It was at Jackson Local that Greenfelder helped Fuline establish and develop the youth program, which is now a very strong component of the Jackson Basketball Program.

“We believe he will be able to help us bolster our youth program and build a foundation which will support the growth of our middle school and eventually high school programs,” Saxer wrote. “We believe he will be a perfect fit for our basketball program and he will mesh well with our current coaching staff and relate well with our players. We are excited to have Justin Greenfelder as a Dalton Bulldog!”

Greenfelder said at the meeting he has been dreaming of the day to run his own basketball program and he is grateful for the opportunity.

“You have a great history of excellence here,” he said. “It’s my goal to take you where you’ve never been before.”

His vision for the program includes a “rowing the boat” analogy where every player has an oar and the team is the boat.

“If the players on that team choose to row the boat in the same direction … they can accomplish anything together.” 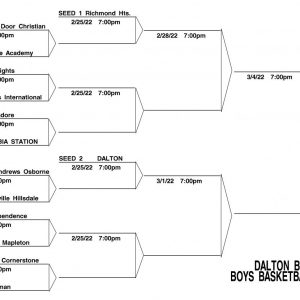