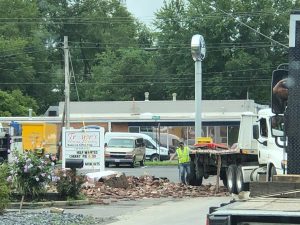 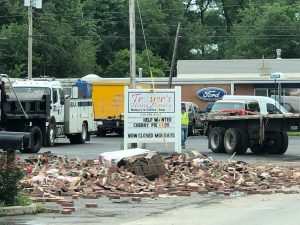 Bricks spill from a semitrailer Aug. 9 in Apple Creek. No injuries or property damage reported.

APPLE CREEK  A load of bricks that had spilled from a semitrailer Aug. 9 in Apple Creek was quickly cleaned up and the driver was issued a traffic citation.

A semitrailer was traveling westbound at about 11:42 a.m. Aug. 9 on Main Street in Apple Creek. As the semi was traveling around the curve at Troyer’s Pantry, its load spilled off the trailer and ended up partially in the roadway and in the business parking lot, according to Apple Creek Police Chief Matthew Estacion.

This was a single vehicle crash and no injuries nor property damage were reported, he said.

A local company (Pro Coat) arrived on scene and assisted with clean up. At approximately 1:19 p.m. officers cleared the scene after issuing a traffic citation for the offense.