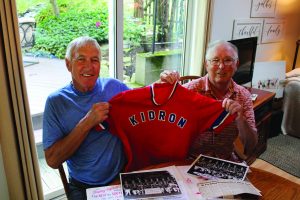 Duane Miller and Harley Gerber reminisce about when the Kidron Merchants fastpitch softball team won the state championship in 1973 and 1978. 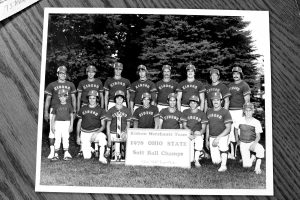 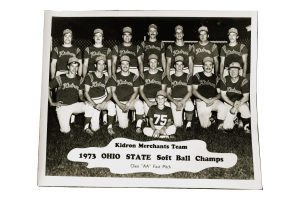 PHOTOS PROVIDED
Members of the 1973 and 1978 Kidron Merchants softball teams, which won state championships. The Kidron Community Historical Society plans to have an exhibit in 2023. 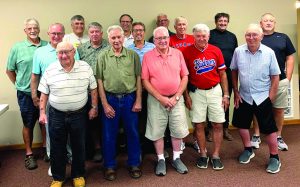 KIDRON  Nearly 50 years ago, a fastpitch softball team from this small tight-knit community won the state championship. Five years later, they did it again.

This is the stuff of major motion pictures. An underdog story with a lot of heart, spirit and strength.

“We had a special group,” said Duane Miller, 77, who lives in Kidron with his wife, Linda, and played shortstop for both of the teams that made it to state.

As the Kidron Merchants fastpitch softball team played at home and traveled throughout the season, friends and neighbors cheered them on, and players’ entire families would pack up and travel with them to support them at the away games.

“It was unique,” Miller said. “It was a unique situation. I saw no other team like that.”

When the team played on Sundays, they would put on their uniforms, gather under a shady tree outside of their motel, and Harley Gerber would lead them in prayer and a worship service.

Fastpitch softball was a popular sport until World War II came along. Well, the sport continued in popularity but military servicemembers played where they were stationed. When the war was over and they returned home, they picked up the game again and began to form teams.

“A lot of pitchers developed out of that and a lot of players,” Miller said. “When the war was over they continued to play fastpitch softball. That’s how you had all those teams.”

At one time there were about 18 teams in Wayne County including Dalton, Kidron, Apple Creek, Fredericksburg, and Holmesville.

“Every little town had a softball team with one pitcher usually,” Miller said.

In the second half of the 20th century, the ball field at Kidron Community Park drew quite a crowd for fastpitch softball.

Read the complete story in the Aug. 10 edition.