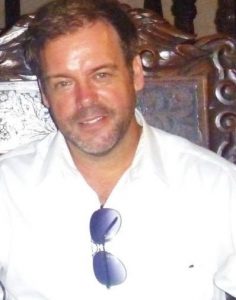 Donald Robert Martine age 59 passed away unexpectedly on September 16, 2022.
He was born April 2, 1963 in Akron, Ohio to the late Robert Edson Martine and survived by mother, Gaye (a.k.a. Marti) Martine. He is also survived by sister, Jill Smith – Olesen (Thomas), nephew Andrew Smith (Kara), Alexander Oleson, uncles David Martine, Lee (Paula) Nelson and Gary Nelson; aunt Joan Conslick and very, very special person in his life Maria.
He was in the theater while in high school and was an outstanding singer. He was a man with many talents. He could build anything and also had a successful drywall business. He was involved with  entertainment and promotions. He loved to travel all over the world and had a successful tour bus business traveling the country. Donnie never met a stranger and would give the shirt off his back to anyone who needed it. He had a charismatic personality and made many friends all over the world. He will be missed by family and friends.
Funeral Services will be held Saturday, September 24, 2022, 1pm at the Swigart-Easterling Funeral Home, 624 Cherry St. E (Rt. 93) Canal Fulton. Burial at Canal Fulton Cemetery. Visitation Friday, 5pm to 8pm at the funeral home.
A Celebration of Life to honor Donnie will be held Saturday, October 15, 2022, 1pm to 5pm at the Rusty Railz, 2972 North Division St., Clinton, OH 44216.