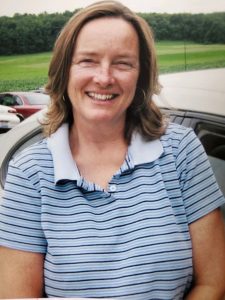 She was born in Massillon on January 24, 1963 to the late Richard F. and Mary L. (Schott) Merry and was a rural mail carrier for the US Postal Service in Beach City.
She is survived by children, John (Isabelle) Merry of Massillon, Amanda Merry of Beach City and Adam (Kari) Merry of Navarre; grandchildren, Madilyn, Kenzie, Vincent, Blake and one on the way, siblings, Marlene Tinlin of Canton, Cathie (Ricky) McHenry of Massillon, Roger Merry of Beach City, Donna Sampsel of Massillon, Richard P. (MaryAnn) Merry and Charles (Brenda) Merry, both of Beach City.
In addition to her parents, she was preceded in death by a brother, Joseph Merry.
Monica was a dedicated mother and Grandmother who loved to travel, she had an engaging personality and made friends wherever she went. Her life was a blessing. Her
memory a treasure, She was loved beyond words and missed beyond measure.
Friends and family are invited to call on Saturday from 2-5 PM at the Spidell Funeral Home in Brewster.
Spidell – Brewster